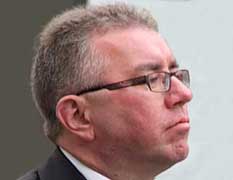 Councillor Peter Craske has been the Conservative councillor for the Blackfen & Lamorbey ward in the London Borough of Bexley, drawing very nearly twenty three thousand pounds a year in allowances before he had to resign from the post of cabinet member for Public Realm.

While there he was the councillor primarily responsible for the constant attacks on motorists. In his own words he set out to maximise the value for money of the fixed CCTV and mobile surveillance systems. In other words, increasing the revenue from fines.

It was Peter Craske who decided to re-band the roads in the outer shopping areas to be the same as in Bexleyheath to ensure higher parking penalties. Craske doubled the cost of parking in the borough and almost tripled the cost of Residents’ Parking Permits.

His reign came to an end when the police arrested him on 21st June 2012 on suspicion of Misconduct in Public Office. He was believed to have impersonated a Belvedere resident by setting up a website in his name full of homophobic obscenities. Four residents who had questioned his decisions at council meetings were accused of various sexual acts in public and the police traced the source of the internet comments to Peter Craske’s internet connection. He was never charged because of what the police termed “political interference” which may have come from County Hall at the request of Bexley’s leadership.

The Chief Executive of Bexley council Will Tuckley is known to have called a meeting with the Crown Prosecution Service and Bexley police in an effort to, as the police put it, “resolve councillor Craske’s situation”. A month later councillor Peter Craske was released from police bail without charge.

Two former Bexley Borough Police Commanders are themselves now being investigated by the Assistant Deputy Commissioner of the Metropolitan Police for the part they played in this miscarriage of justice.

12th September 2012, News Shopper announces what many had guessed, cabinet member for Public Realm, Peter Craske, has been arrested by Bexleyheath police.

Peter Craske’s modus operandi is to confuse, bamboozle and obfuscate any statistic or fact he can get hold of and for that reason this website has frequently referred to him as a liar. That was not something done lightly and when so labelled examples were given. Doing that becomes repetitive and a chore, hence this page which provides an easy point of reference.

• Stating that there is no £4m. contract between Bexley council and the transport consultants, Parsons Brinckerhoff. An FOI, the local press, Bexley council’s website, their quarterly magazine and PB themselves all said otherwise. Link

• At a council meeting said that a survey of attitudes towards CPZs had been conducted in Bexley. A council official and an FOI stated this was entirely untrue. Link

• Claimed that the total cost of issuing each Residents’ Parking Permit was more than £240 per permit, a figure that the accounts department could not justify. They admitted the underlying figures were the result of guesswork. Link.

• Stated on the Conservative party’s website and repeated at every opportunity in the local press, that Bexley had “the cheapest parking, and the most parking in South East London”. Both statements are untrue. Blog Link. Parking costs in Bexley and adjacent boroughs.

• Boasted on a Conservative Party website that he had voted against raising the level of parking fines when in fact he had quietly re-zoned Bexley’s parking areas to ensure the penalties were increased. Link

• In reply to a a member of the public at a council meeting claimed that answering FOIs cost more than the revenue from parking penalties. Link

• When the subject of a Standards Board complaint made up an excuse for his behaviour that was untrue and proved to be untrue by the council’s own minutes of a meeting. He had to make up a new excuse. That wasn’t true either. Link

• When asked questions about the certification for the council’s parking spy cars was unable to respond truthfully for fear of incriminating himself preferring the dishonest statement “Your allegations against me are 100% false”. There were no allegations. Link

• Stated in a press release and on the council's website that a reference to the increase in the cost of parking permits would be included in all renewal notices. No such outbreak of honesty and transparency occurred. The renewal notices merely demand the new price.

• Claimed that the cost of refurbishing the Hall Place car park was one million pounds (Strategy 2014 Report). The true cost was £3,605,000. (Capital Expenditure Report). Link

• Associated his name with the comment on the Conservative Party’s website that said that councillor Seán Newman (Labour) said there was no railway station in Bexleyheath when he only said (correctly) that Barnehurst station was closer to the Civic Offices. Link.

• Claimed on the council's website that the new parking contract was “value for money“ (weasel words) when the published budget showed the cost to have risen by £55,000.

• Claimed that Labour Councillors were in favour of fly tipping. Link