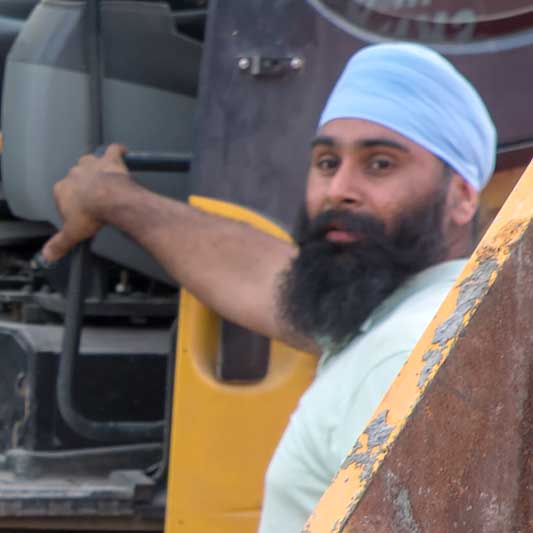 It was three weeks ago that Bonkers first started to get reports of devastation being wreaked on some garden trees on the southern fringe of Lesnes Abbey Woods. The address was 238 Woolwich Road.

Those reports said that the house had been purchased in the Spring of 2018 for around £450,000 by an individual who turned out to be the same man who had taken full advantage of planning laws when Ye Olde Leather Bottle was demolished and the site left in such a state that the Health & Safety Executive took an interest in it.

To my regret there never seemed to be a good time to visit Woolwich Road but last Sunday I managed to get around to it. A Sunday was chosen because last time I encountered Mr. Singh he pushed me around a bit and made various threats. I was in luck, Singh was not there but a neighbour was.

From the neighbour’s rear garden the sight is simply unbelievable. Where ancient oak trees once stood there is nothing but a barren landscape but look a little closer and it can be seen that the earth is no more than a couple of inches thick. Beneath it is a slab of concrete estimated to be more than 20 metres square.

How was that allowed to happen under the neighbour’s noses? Easy. The new owner befriended them, said he was going to refurbish the house and move into it with his family, but first he was going to terrace the garden which drops at such an angle as to render it almost unusable. Would the neighbours like any surplus earth to help level their own gardens? Would they like retaining walls erected free, gratis and for nothing? One or two small trees might have to come down.

The neighbours were happy to oblige their new friend.

Work began, the most contentious of it at weekends, and soon the most enormous hole appeared, quickly secured with a high wall and pumped full of concrete from a convoy of rotating carriers not seen in such numbers since Network Rail put in the foundations for their new station a mile to the north. 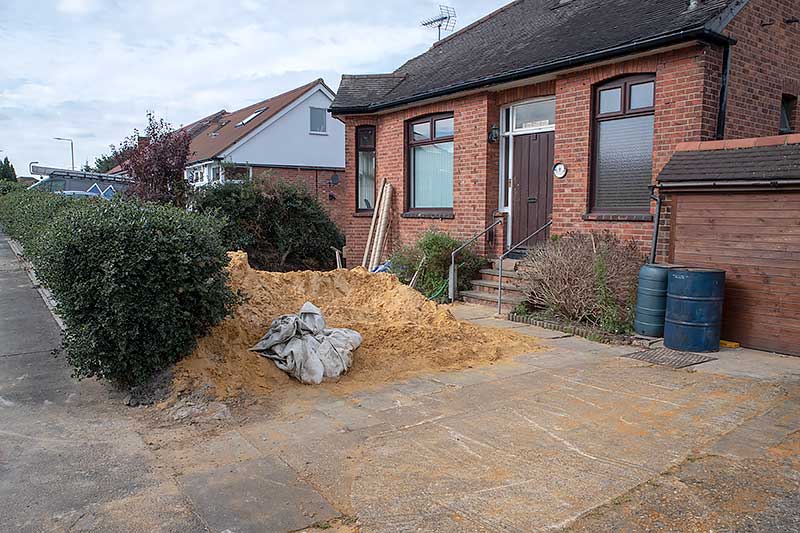 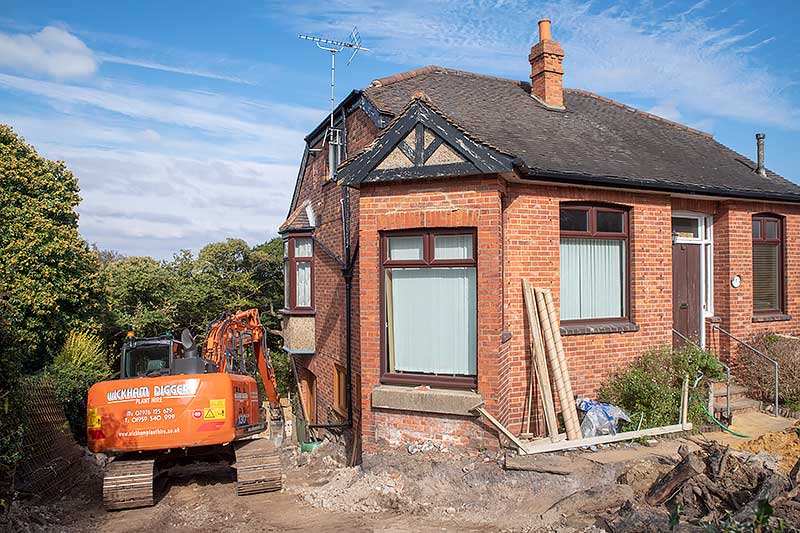 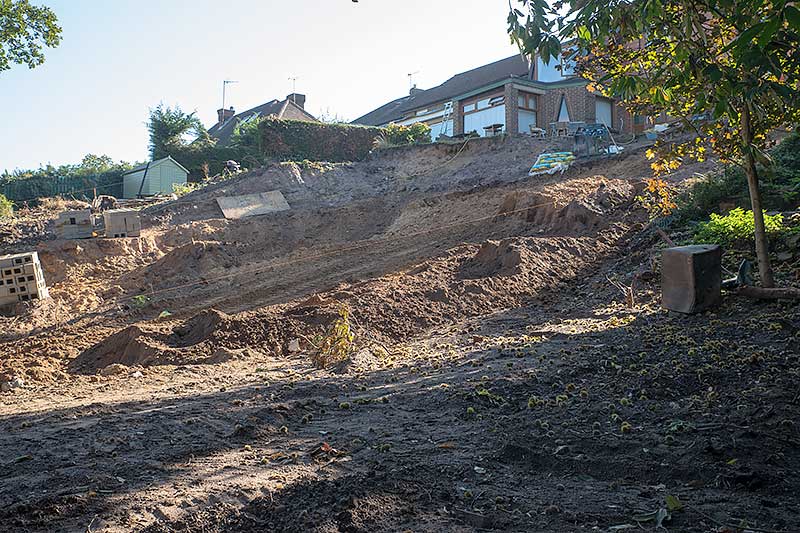 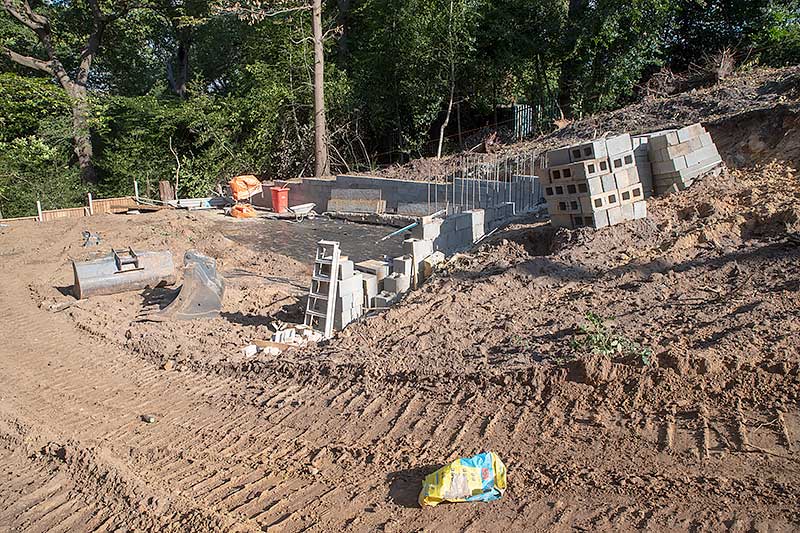 What happened to the oak trees? They came crashing down one Sunday morning and crashed not only across the immediate neighbour’s garden but the next one too.

On my way from the scene another neighbour came over with further information, this one with first hand knowledge of large civil engineering projects.

Where the concrete slab takes the greatest pressure from the sloping terrain the concrete is about four metres thick, tailing off to something like one metre at the other end. The job could not have cost less than £40,000 I was told and currently the house pictured is close to the point at which there is some danger of it slipping into the pit.

Why would anyone need such a massive slab of concrete in their back garden? No one knows but the civil engineer said it was the sort of slab on which one could build a skyscraper. 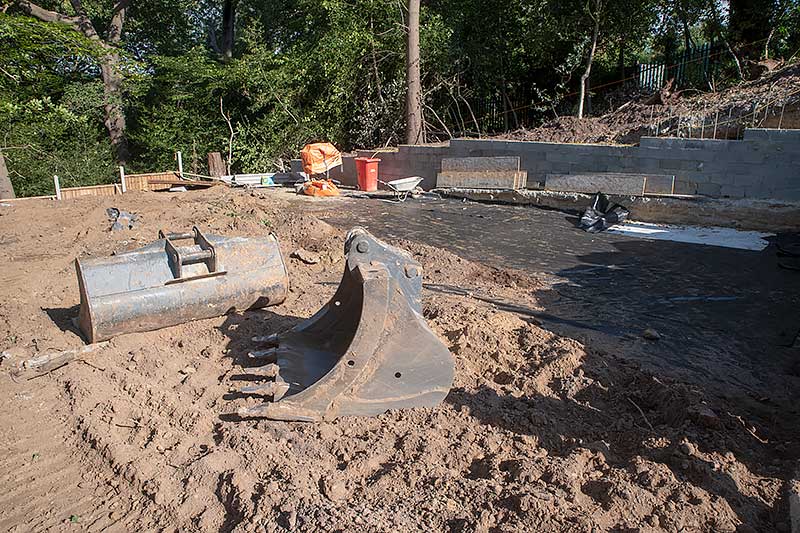 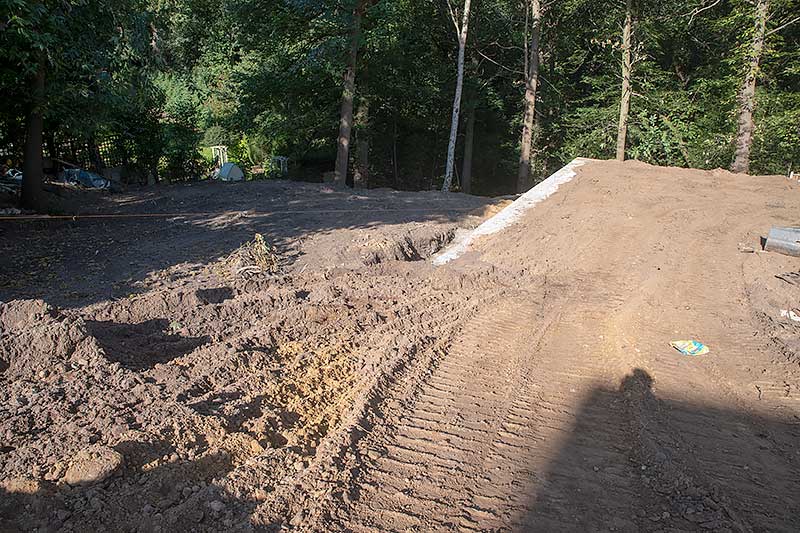 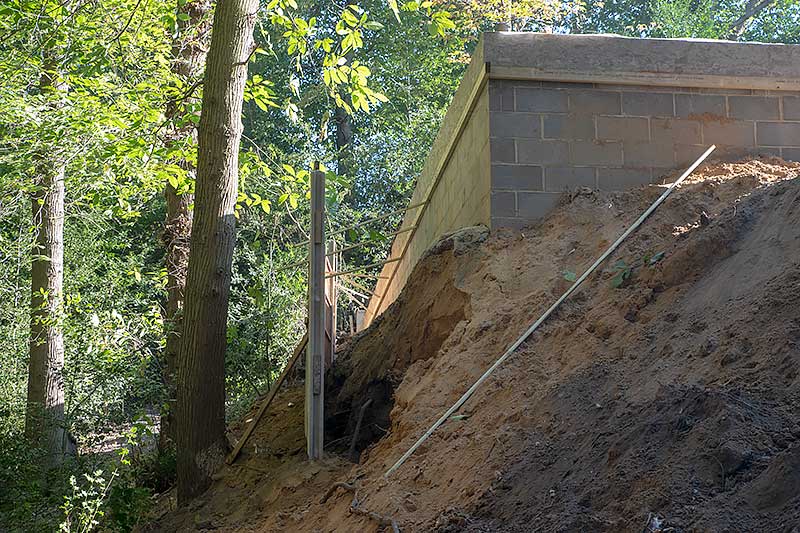 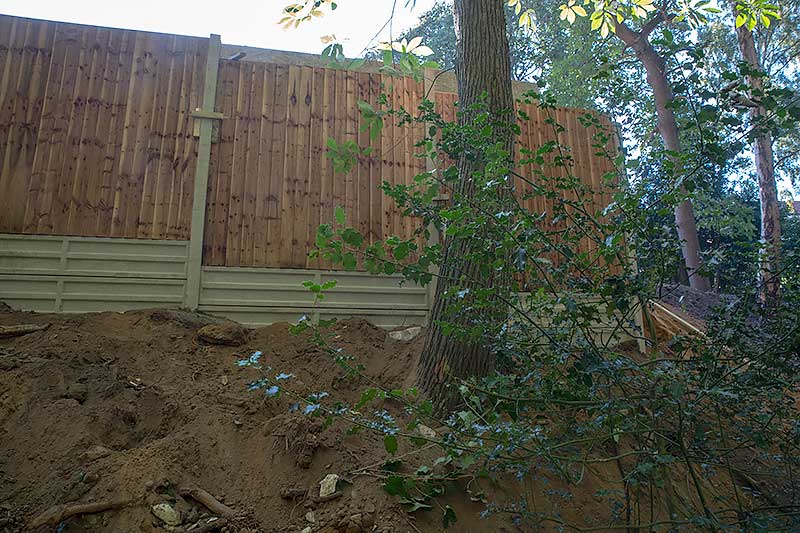 Where the garden meets Lesnes Abbey Woods and one of its many footpaths the retaining wall towers above the heads of any wood walkers. The pictures do not do the scene justice. A fence to mask the wall is under construction and it must be more than 15 feet above the original ground level.

As you may imagine, the neighbours are no longer best friends with Mr. Singh and just as I was myself two years ago have come under threat. They have been led to believe that another concrete slab is planned, maybe even two more and Mr. Singh is very annoyed with them for reporting the situation to Bexley Council, something they deny.

That is because it was me who precipitated that train of events.

When I failed to go to Woolwich Road as quickly as I should have done I instead passed my information to my Belvedere Councillor Sally Hinkley who reacted immediately. She had already noticed the evidence of building work in progress when driving by but had no idea of what lay out of sight. Suitably shocked she told Councillor John Davey about it as the property is in West Heath ward.

As I understand it, it was John Davey who involved the planning officers and reports are that contrary to Mr. Singh’s assertions the work he has carried out is not permitted development and planning permission is required.

How he can put things back to how they were if his application is refused will pose a bit of a problem.

Will Bexley Council prove to be more effective than they were when Ye Olde Leather Bottle was demolished without their knowledge?