Bexley council - Not happy unless they are wrecking something 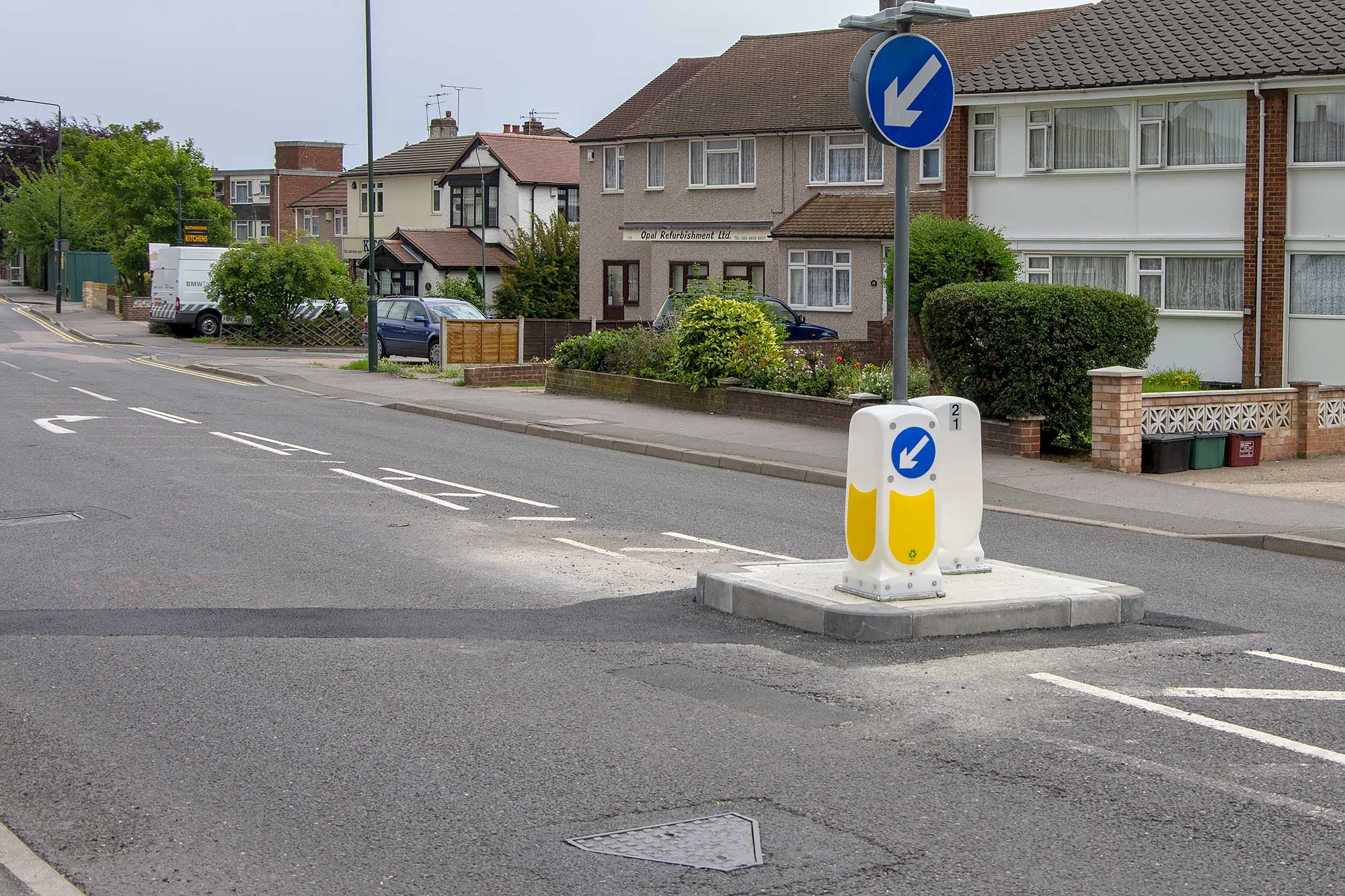 If a report comes in of poor road design and total failure to consider its consequences you can be pretty sure that you will see the name Vinny Rey at the foot of any correspondence. It was his name that I saw on the Ruxley Roundabout correspondence and I saw it again when looking at another case of inconsiderate idiocy at the western end of Blackfen Road.

Back in February some residents there were advised that another traffic island was to be installed in their road. Following objections from those affected Mr. Rey visited and assured everyone it would be just a little island with a keep-left sign on it.

When the contractors turned up to do the work it didn’t look like a little island and it wasn’t in the middle of the road either. The men doing the work queried the fact it was two-thirds the way across the road (Photo 1) and barely passable by a bus. But the council insisted they were right. Now that it is installed it is impossible for affected residents to back their cars into their front gardens. If they pull up ready to reverse the island, being too close to the pavement, (Photo 3) prevents them putting their wheel on full lock; so they have to drive in forwards. Reversing out is not only contrary to recommendations to be found in the Highway Code but the road is on a bend (Photo 5) and visibility when reversing is dangerously poor.

Bexley council is no longer listening to complaints but earlier correspondence reveals that the island was installed with the aim of reducing traffic speed by 2 m.p.h. In practice the islands have made parking on the road nearby (by the hedge in Photo 1) too risky so the unimpeded traffic is able to go faster. Bexley council has given a reason for offsetting the island from the middle of the road; it is to protect cyclists. Apparently cyclists ride from West to East but they don’t come back again so provision for keeping them safe is only necessary on one side of the road.

When the A2 is closed because of an accident, by no means an uncommon occurrence, Blackfen Road jams up even more than usual because local traffic cannot take advantage of the turn right or left slip lanes until the very last moment. If an island was necessary, and Bexley council haven’t been able to provide any justification for it, why wasn’t a regular sized one put in the middle of the road a little further along where it wouldn’t have to block someone’s drive? I suppose it is the same mind set that builds bus stops across private access roads. 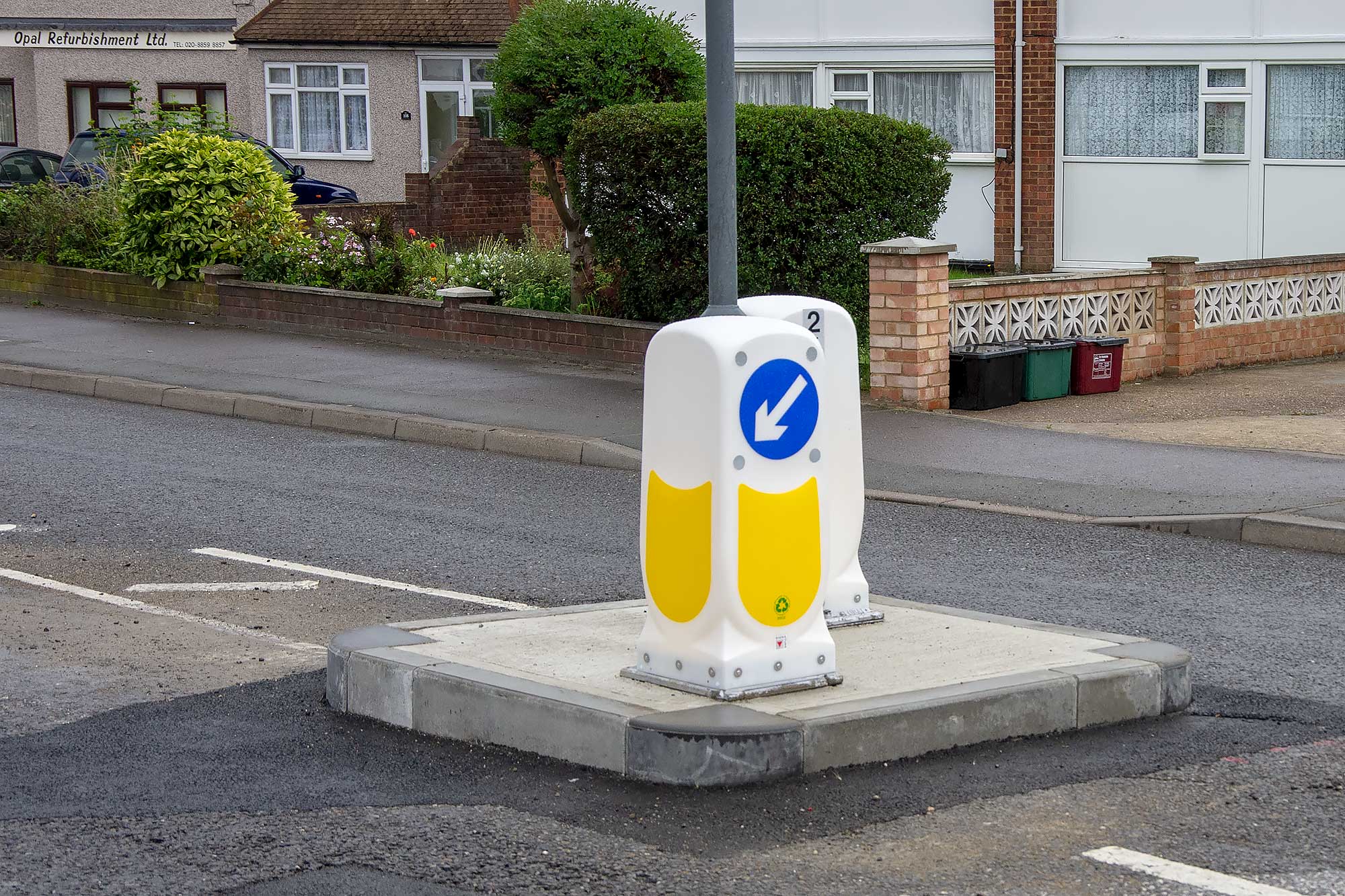 Road too narrow to allow for reversing in. Not exactly easy to get in forwards either. Bexley council has suggested driving to a side road to reverse and approach from the more favourable direction. 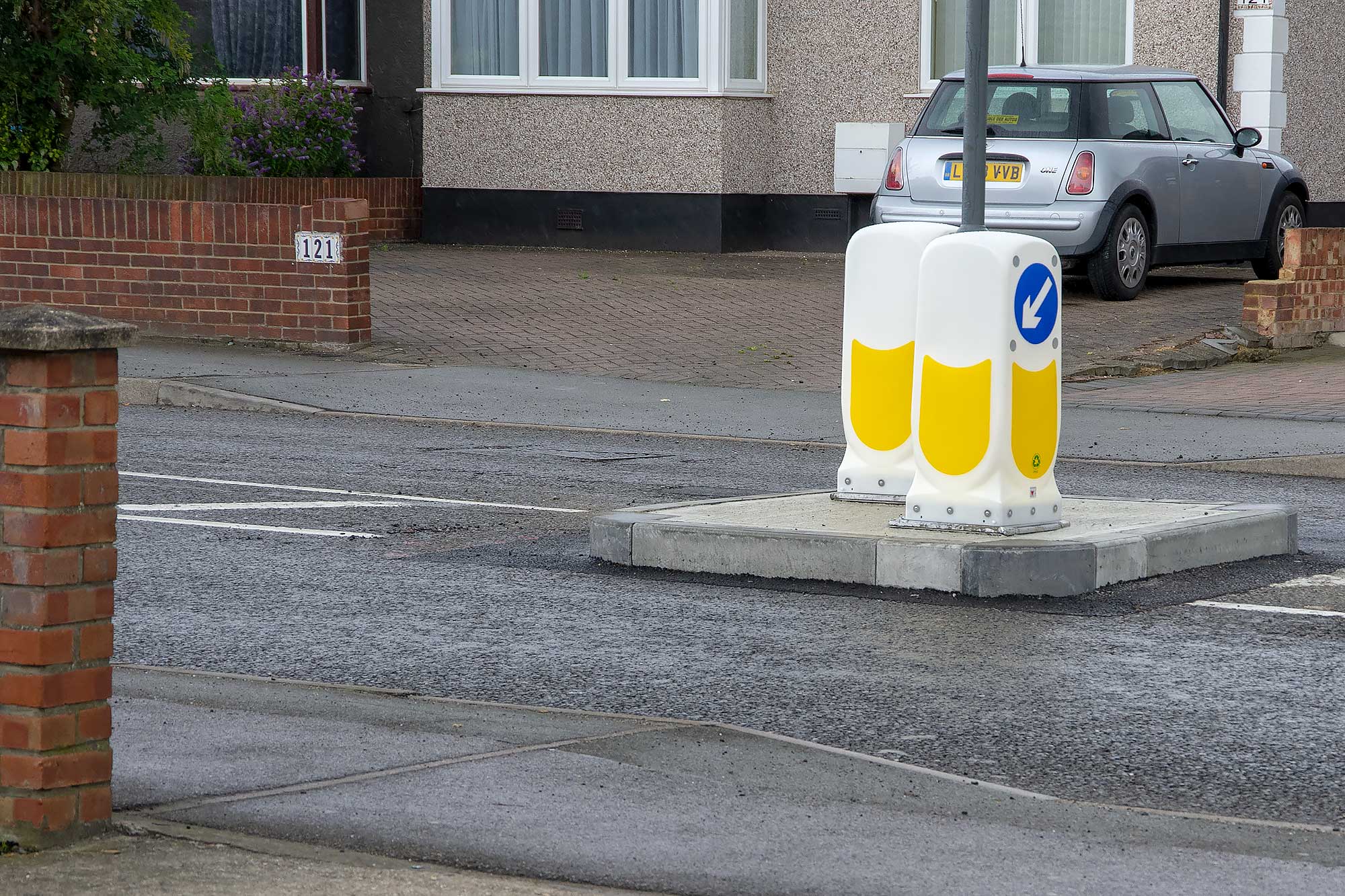 Bexley council wouldn’t allow a resident to build a pavement crossover so close to an obstruction in the road on safety grounds, so why is it OK for them to build this traffic island in such a stupid position? 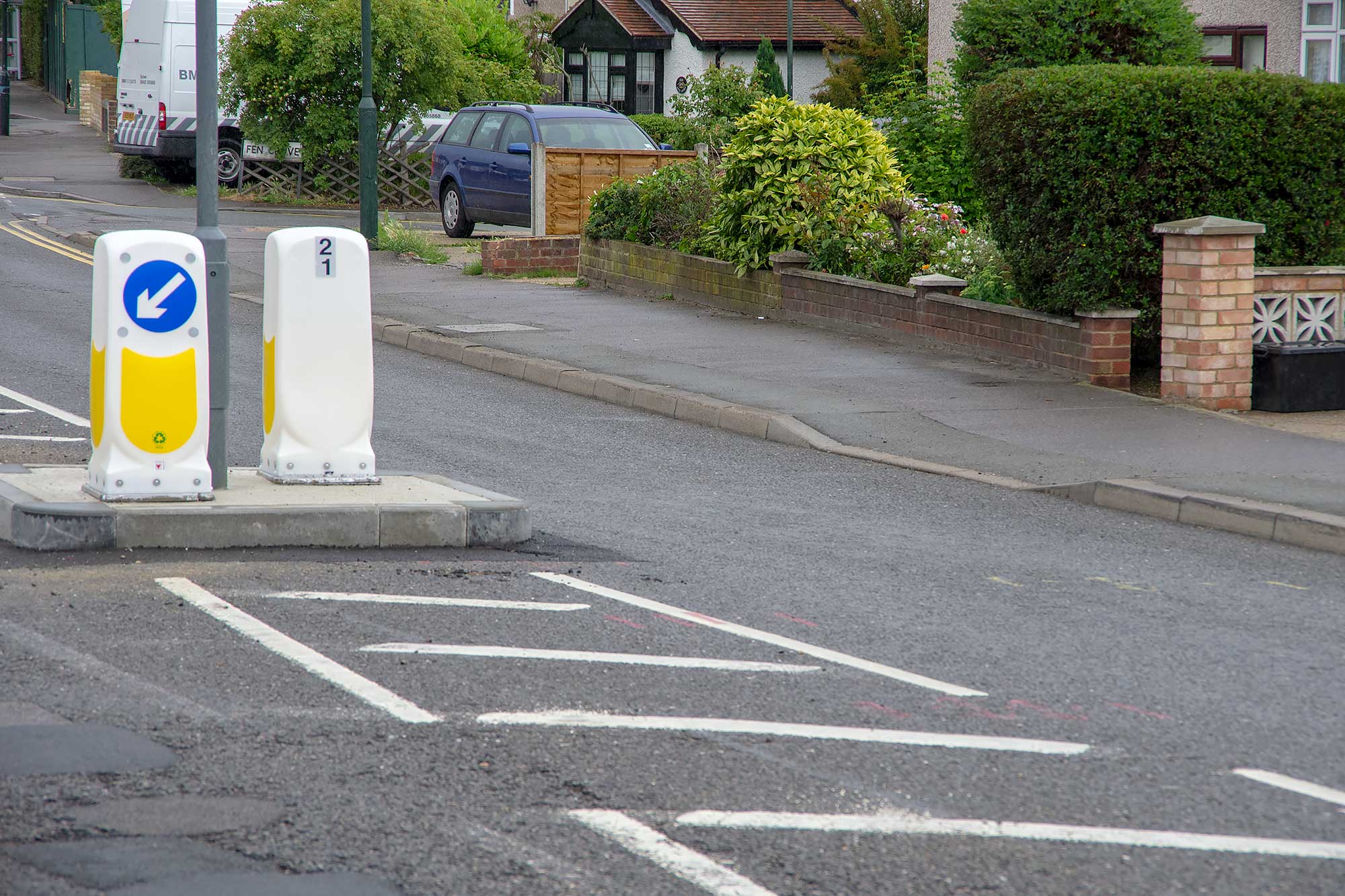 Buses clip the kerb as they go by. 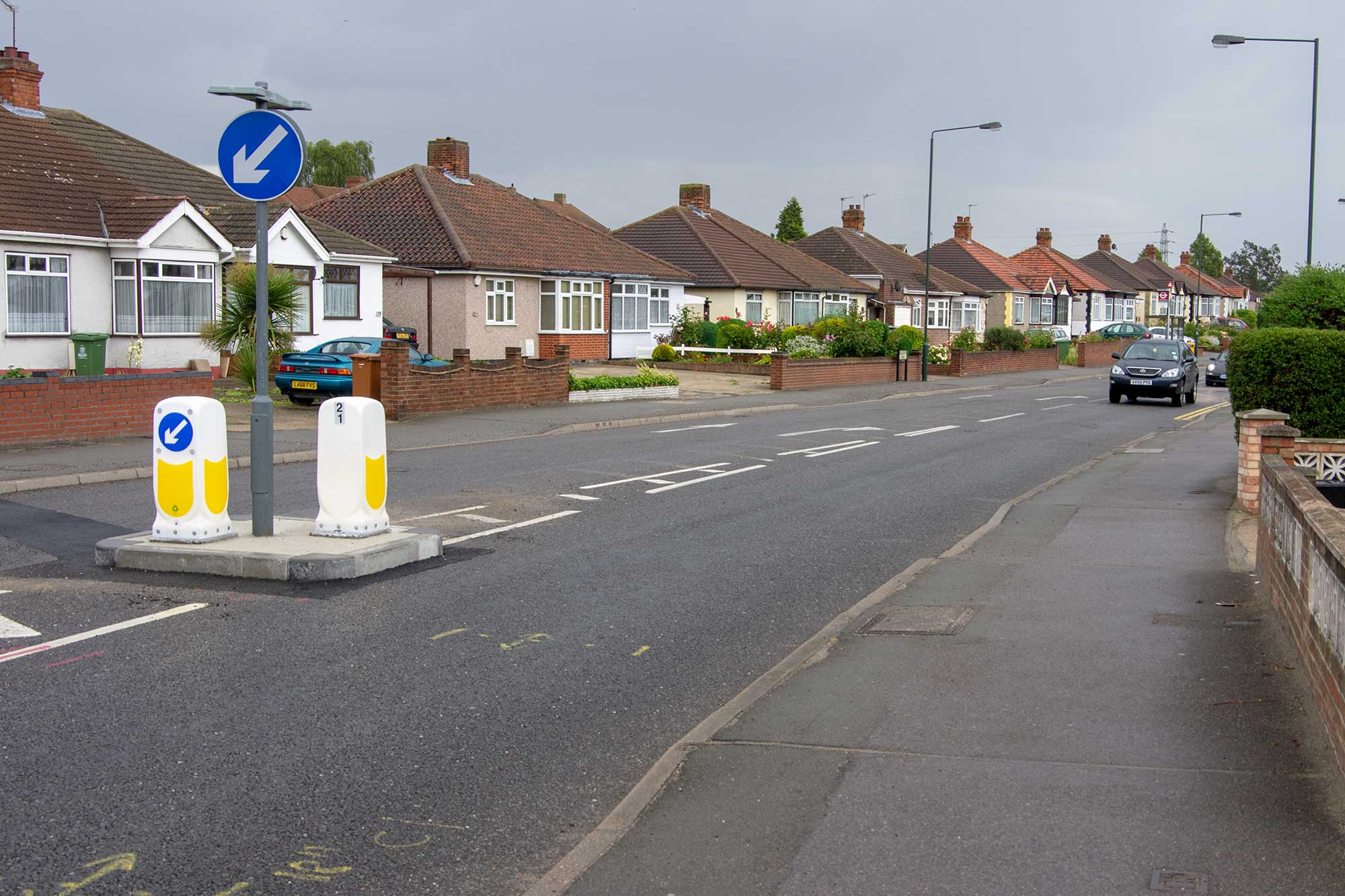 Reversing out is too dangerous due the the blind bend.