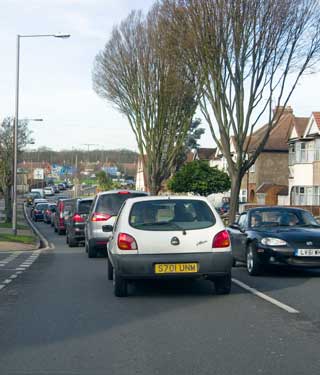 I don’t drive across Bexley very often but even so I do notice the way roads are constantly being changed and rarely for the better. Fewer than ten years ago a section of Picardy Street in Belvedere, because of parking bays, a cycle track and the white centre line, was effectively reduced to a metre wide on a route with 20 buses scheduled hourly. It existed for about three years until sense triumphed. A section of Abbey Road was not so favoured. A cycle track in the middle of the road survived for six years before a road narrowing scheme in 2007 saw its demise, so it was with some surprise that at the same time as these idiocies were perpetrated the exit from Penhill Road to the roundabout at the Danson Underpass was divided into two lanes so that two cars could exit simultaneously to the large roundabout. The traffic congestion reduced overnight.

Naturally the council could not allow this happy state of affairs to exist for long and in October 2007 the central reservation was widened and the road markings changed so that it was no longer practical for more than one vehicle at a time to await an opportunity to exit. A friend who has the misfortune to have to negotiate that roundabout twice daily told me about the ensuing chaos and I took a look for myself. On 13th November I emailed an enquiry to Bexley’s contact centre. “I would be obliged if you would tell me what your motivation is and the reason for wanting traffic to unnecessarily queue in Penhill Road.”

The very next day Aurang Zeb (Traffic & Road Safety Manager) replied saying “As part of a School Travel Plan Scheme we have recently replaced the refuge islands in Penhill Road and installed a staggered crossing. This scheme was introduced to help pedestrians, particularly school children cross the road. The junction is extremely busy and I am aware about the scheme’s affect on its capacity. However, it was important to reduce the difficulties and danger faced by pedestrians in crossing this heavily trafficked road.”

I responded with “I can imagine it might be a difficult road for a pedestrian to cross but in my experience it may be an unnerving experience rather than dangerous. The traffic is pretty well always stopped in a short queue and when there is no queue there are almost by definition, gaps in the flow. To make a pedestrian’s life easier you should have put in a proper crossing thereby giving them a safer environment without restricting the junction. From a pedestrian’s viewpoint you are not helpful enough and from a motorist’s will seem malicious.”

Mr. Zeb said “We did consider all other forms of crossings i.e. zebra/pelican but both had to be a) located away from the junction (which means not on the pedestrian desire line) and b) caused more delay to traffic as they give priority to pedestrians. The island was a compromise solution. Pedestrians exercise their judgement in search for a safer gap and cross the road without demanding anyone to stop on the road.”

There are numerous pedestrian crossings at junctions around Bexley as anyone with eyes can see so that excuse seemed more than a little lame and the bit about pedestrian crossings causing more delay is obvious nonsense. It might stop the traffic when school children are crossing around 9am and 3.30. whereas the so called ‘compromise solution’ causes delay, noise and air pollution for most of the day every day. I formed the impression that pursuing things further would be a waste of time if all I was going to get in return was total nonsense and sometimes there are better things to do in life. But thanks to Mr. Zeb’s antics hundreds of motorists have had five minutes added to their journey times ever since. At least Mr. Zeb answered quickly and showed no sign of the arrogance and tendency to break the law when it suits as I have too often seen elsewhere.