So finishing off Abbey Wood station is running a month behind schedule. It’s four years since Network Rail took over Abbey Wood and caused a great deal of largely unavoidable inconvenience around the flyover and something much worse than that in and around Abbey Grove and they are just a few weeks behind schedule. If only Bexley Council could be that ‘useless’ with their road projects. Bexleyheath Broadway has been in turmoil for longer than that with no transport infrastructure improvements whatsoever yet apparent.

It was last March that an official opening was set for 23rd October but the writing was on the wall by early September when it became clear that no firm arrangements for that opening had been made. From then an increasingly sceptical BiB made no further forecasts although the News Shopper jumped in with both feet last week.

Now it is all off, officially cancelled. Not the opening to the public, they will be using the station as scheduled from next Sunday, just the official celebration. 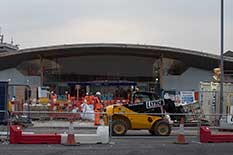 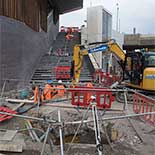 The official reason for the postponement is that it will give more time for staff to become familiar with the new facilities. The real reason will have more to do with these two photographs taken at 16:30 today.

No one should blame Network Rail, they have by and large done a magnificent job but I might blame them for their choice of bigwigs to cut the ribbon.

Not exactly champions of improved transport infrastructure either of them.

We have Teresa O’Neill, Leader of Bexley Council who single handedly deprived South East London of the Thames Crossing planned by Ken Livingstone, and Sadiq Khan, Mayor of London whose first act when gaining power from a gullible electorate was to cancel both of Boris Johnson’s Thames Crossings.

When Robert Stephenson opened his Stockton to Darlington railway in 1825 a politician fell under a train and was killed, would it be…

No. I must curb such thoughts or our pathetic police - let’s not investigate shop lifting, burglary or car crime - will be back to my door very keen to cart me away.