If one can have a favourite Scrutiny meeting, mine would be Places. Consistently interesting subject matter chaired by someone who knows how to charge through 216 pages of Agenda in only 150 minutes. All without annoying fellow Members which is more than one can say for some Chairmen.

Councillor Melvin Seymour went through the Agenda items in an almost random sequence for which he had his reasons and I am going to do the same and once again for a good reason; it is particularly topical.

The subject is the Regeneration Update, Item 9 on the Agenda. 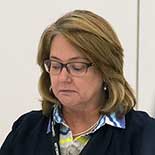 The first comment came from Councillor Cheryl Bacon (Conservative, Cray Meadows) who welcomed Bexley’s support for a college of rail engineering. Having not supported infrastructure expansion at the critical time when government might have authorised Crossrail being extended further east than Abbey Wood perhaps the Council has decided to build their own railway.

The first sensible comment and questioning came from Councillor Danny Hackett (Labour, Lesnes Abbey) who complimented Peabody Housing Association for keeping local Councillors fully informed of their plans. He was pleased to see that the Wilton Road shop regeneration was now well advanced and asked when the Public Realm improvements might commence.

He said, somewhat to my surprise because I am in contact with the Wilton Road traders almost daily, that residents had told him there was another consultation in progress. No one had told him officially. He sought information.

He also asked what impact Crossrail was having on “businesses large and small” and for the latest information on the Council’s lobbying for a Crossrail extension.

Mrs. Jane Richardson (Deputy Director of Regeneration, £93,288 p.a. plus 20·6% Council pension contribution) said the Council was working with partners in Kent on a business case coordinated by TfL. It had been signed by Council Leader Teresa O’Neill and gone to the Treasury. It had also been signed by the Leaders of Gravesham and Dartford Councils. The case “made it very clear that extending Crossrail, certainly as far as Slade Green is outstanding value for money. Beyond there things get more difficult and more expensive.”

On the subject of Thames Crossings, there was disappointment with the London Mayor’s statement last week which failed to mention the Gallions and Belvedere crossings proposed by the previous Mayor.

Ms. Tiffany Lynch (Infrastructure Strategy Manager) reaffirmed that Abbey Wood station will open for North Kent services in October 2017. She said the current line closures are having a detrimental effect on trade in Abbey Wood and repeated what had been said at the last Crossrail Liaison Panel meeting. viz. That it was promised that rail closures would be much reduced after Platform 2 opened in August but in practice were continuing with only four weekend days of respite before Christmas.

Whilst Ms. Lynch accurately reported the complaints made at the Liaison meeting, my recording of the previous meeting in June clearly shows that what is happening now is almost exactly what Network Rail forecast then. There will be no let up in the closure programme until the Crossrail track is laid which is unlikely to be completed before January.

Completion of Public Realm work around the station will be delayed until May 2018 because of various conflicts with other Crossrail related work going on in earlier months.

Councillor Hackett again asked if there was a current consultation about the regeneration of Wilton Road and the surrounding areas. Residents had been told nothing about it if there was. Ms. Richardson said “we will have to come back to you on that”. 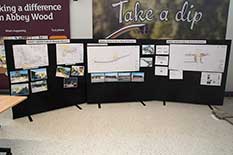 When I went into Sainsbury’s Abbey Wood at one o’clock today there was indeed a visual display of the Council’s plans. Clearly the left and right hands are not talking to each other in Bexley.

The attendant told me that the display will continue through until Sunday. I was a little alarmed to hear that further restrictions were to be introduced on parking in the area when only two weeks earlier I had attended a Greenwich presentation where it was promised that no further restrictions would be imposed. It is a joint Bexley/Greenwich scheme so perhaps another left and right hand problem.

Why a consultation at this late stage I do not know. Both Councils are saying work will start on Wilton Road by the end of this month and today’s display shows a November start date for Harrow Manorway.

Councillor Stefano Borella (Labour, Northend) said he was delighted at the Mayor’s promise of a DLR extension to Thamesmead and the possibility of an Overground extension to Abbey Wood. He hoped the DLR might eventually be brought further south, perhaps to Bexleyheath. The present plans see it terminate in the Borough of Greenwich.

Councillor Churlish Bacon said that nothing the Mayor said had been agreed. She suggested that Stefano tell “his Labour Mayor where Bexley actually is”. She also asked Stefano “if he was in the Mayor’s faction or in your Leader’s faction”. The only sour note of the entire evening. 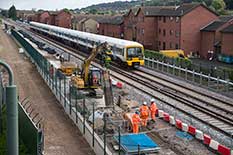 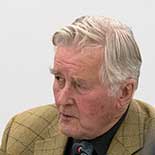 Councillor Colin Tandy (Conservative, St. Mary’s) had “no doubt that Crossrail will be extended further east perhaps incrementally bit by bit. Sidings already go a considerable way towards Belvedere which ties in with our regeneration aspirations there so perhaps we can have some of the Crossrail trains going there and then back again.”

This seems to me the only relatively quick and simple solution. One of the Crossrail tracks is by design well and truly blocked by the new Abbey Wood station but the other goes beyond it for the best part of a mile towards Belvedere to provide a dumping place for failed trains and to allow engineering train access from Kent to the Crossrail depot at Plumstead. Extending the track for a further half mile to Belvedere and running a train every 20 minutes looks to be an easy thing to do with no need to switch to third rail operation which might otherwise be necessary.

Councillor Joe Ferreira (Labour, Erith) asked what was happening to the two big empty sites in Bexleyheath. The old Civic Offices in Broadway and the BHS store.

Ms. Richardson said that things are well advanced on the BHS site and “residents will be really pleased within the month”. (The security guy in The Mall says it is to be a branch of the department store Morleys.)

The Broadway site bought by Sports Direct is also progressing well but there are big issues about road access. There is a “very active dialogue" and there should be an announcement before the end of the year”.

Councillor Brian Beckwith (Conservative, Blackfen & Lamorbey) asked about the regeneration of Blackfen but Ms. Richardson said it was “very difficult to come up with a solution. It is not straight forward”.

Bexley Council's Abbey Wood regeneration webpage. There is also a website at www.yourabbeywood.co.uk. It isn’t finished and needs a password. It is Bexley1617.

Note: The room was laid out exactly as shown in The Buffoon’s Agenda map. More than sixty chairs for the public complete with Berlin Wall and apart for the opening session of the meeting, only me there!