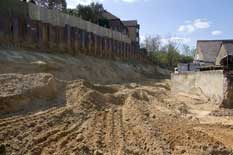 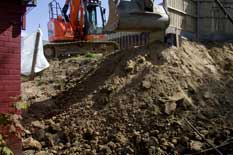 I was lucky with my trip to Heron Hill today, just before I got to The Leather Bottle a smartly dressed man jumped out of a large motor car and entered the building site. By the time I got there all the construction people were gathered around him as he appeared to be serving some documents on them.

While they were distracted I took the opportunity to poke my lens over the wall but before I could press the button (Photo 1) I heard them shouting and knew I was being chased by Indian gentlemen again.

They really don’t like people taking an interest in whatever they are doing. I’d say it was a sure sign of a guilty conscience. I was asked why I was taking pictures and told I couldn’t. They do not seem to be aware that one can photograph almost anything from a public place. I wandered off with them still shouting at me. Their excavations appear to have spilled outside their boundary fence too (Photo 2).

What will it take for Bexley Council to take an interest in this? A landslip perhaps. 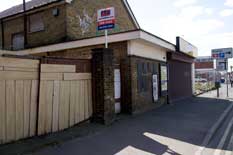 Another public house site that is a northern eyesore of no interest to Bexley Council and hasn’t been for the past six years is The Harrow Inn at the foot of Knee Hill. It was bought by Peabody recently but I heard one of their people say that the adjacent former Threshers premises was too expensive.

And so it is. They are asking for half a million largely on the back of it being a minute’s walk from the Crossrail station.