Note: For ease of reading, all the small images will expand when clicked. 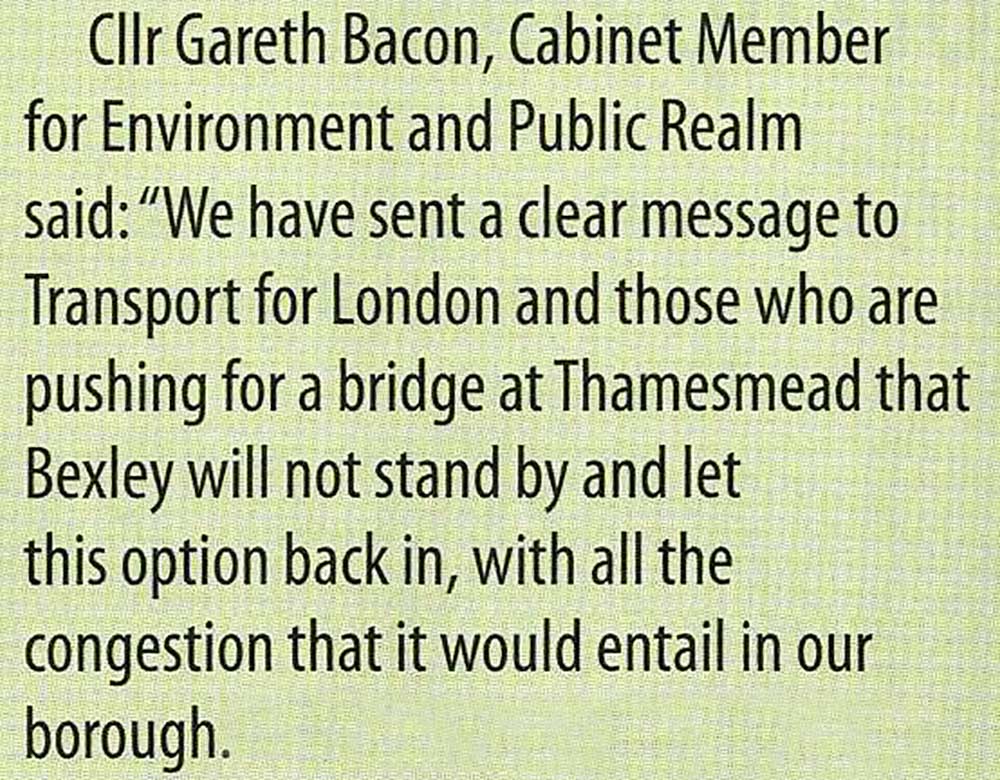 There were several subjects worthy of debate at last night’s Full Council meeting but I am going to jump straight to Motions, one of which was about the lunacy of South East London being denied easy access to North East London by a succession of frequently brainless local Councillors and point scoring Mayors.

Skipping quickly and somewhat superficially through fairly recent history: in the middle 1990s there was a proposal to build a motorway style Thames bridge and a Southern access road which would burrow under Wickham Lane in Plumstead on its way to the A2. It was not popular among the Greenies and Lefties and the East London River Crossing was eventually thrown out by a Government inspector if I remember correctly.

The first modern Mayor of London was Labour’s Ken Livingstone who came up with a much more modest plan which had Bozo not been elected to be Mayor in 2010 would have been up and running in 2014.

Along came Bexley’s very own Bozo and with her new friend at the GLA ensured Bexley’s continued isolation. Ken’s little bridge was cancelled by his successor who was more interested in Garden Bridges in Central London. 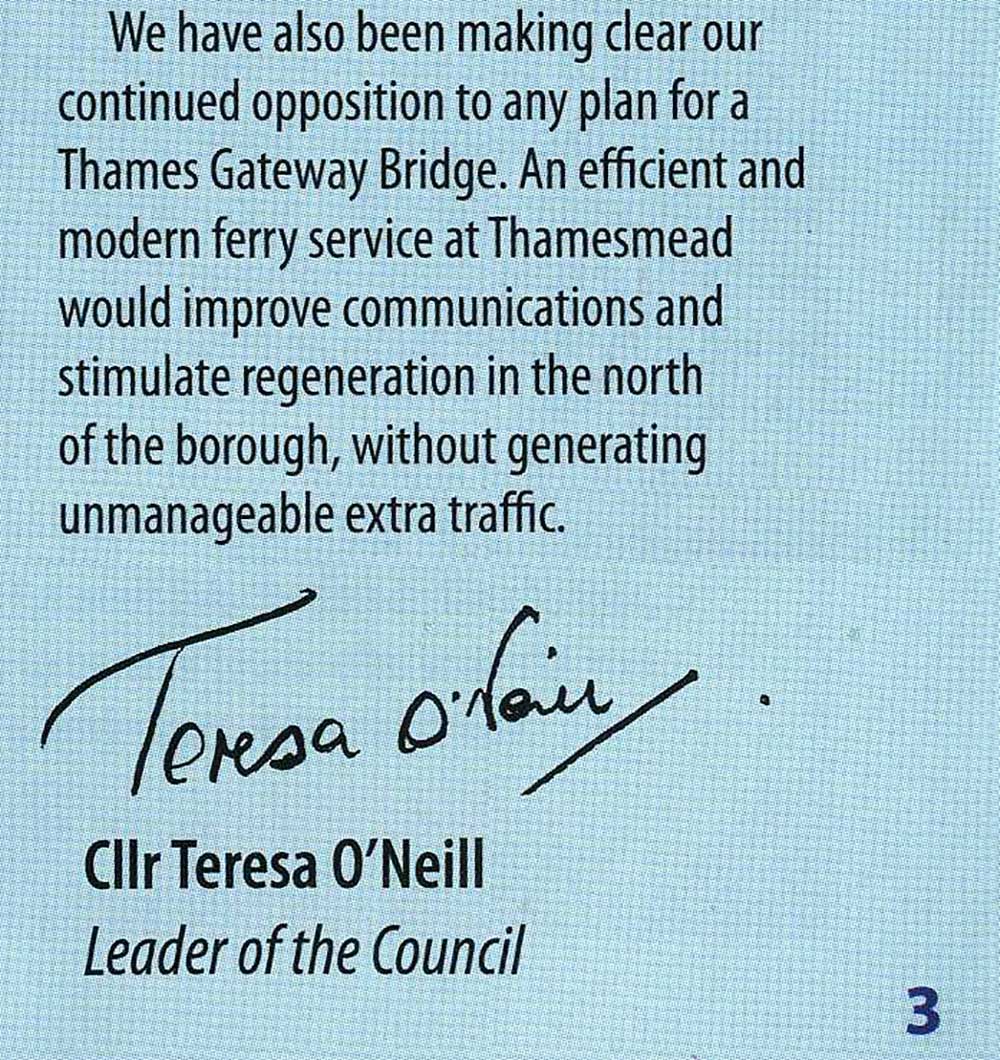 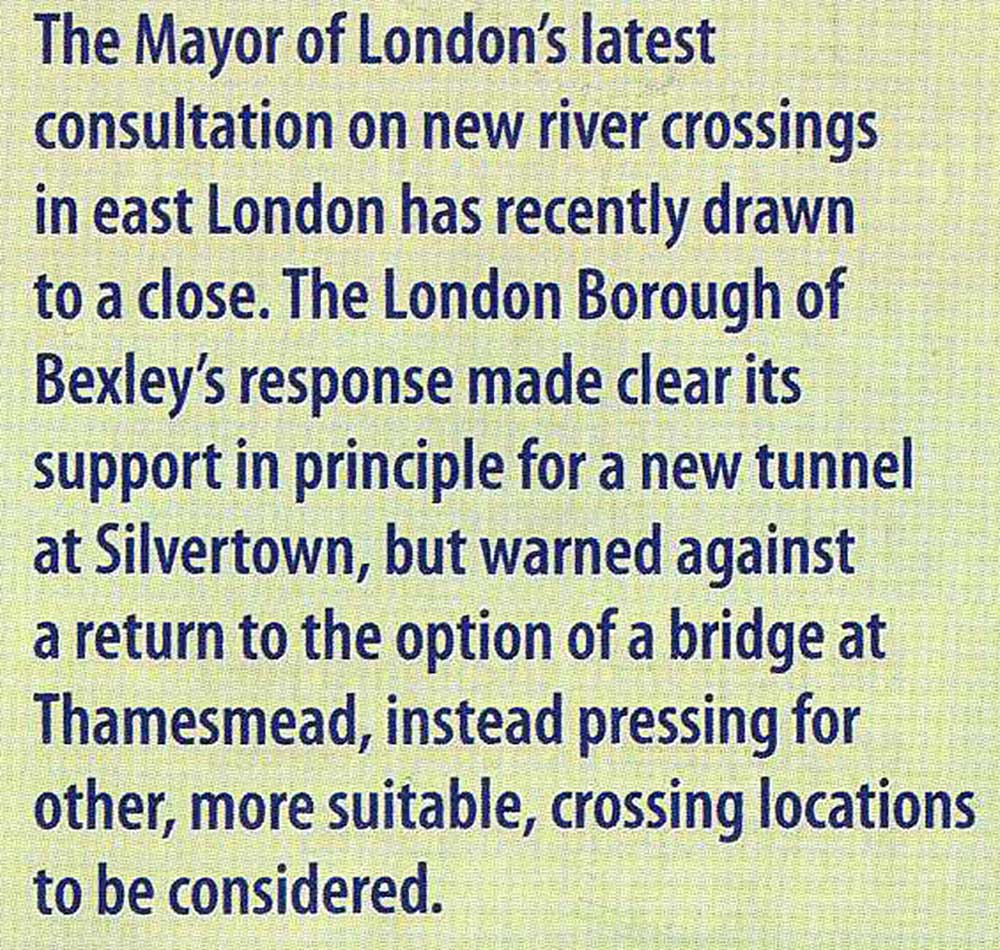 By 2014 Bexley Conservatives were beginning to wake up to what anyone with a brain cell had seen long before; if the borough was to grow it needed transport infrastructure to attract businesses which could finance its ambitions. Hence the sudden interest in Crossrail and river crossings. Little Bozo persuaded Big Bozo to give Bexley two little river crossings, a very good idea because it would distribute cross river traffic across a wider area of Bexley’s poor road systems.

And then Khan’t came along and either because he wasn’t going to back anything proposed by Big Bozo or because he already knew that his plans would likely place TfL’s finances in jeopardy, he cancelled Big Bozo’s bright idea.

Khan’t has done nothing for Bexley since he cancelled the bridge other than making mainly vague promises about a DLR extension.

Although Councillor Gareth Bacon, GLA member and MP for Orpington was dead set against any river crossing in Bexley back in 2013, last night he put forward a Motion which was all for it

Motion presented to Council on 4th November 2020. A very dfferent Councillor Bacon from the one who stood at the top of Knee hill to campaign against a river crossing.

A slow coming enlightenment. Congratulations to the new MP who unfortunately was unable to partake in proceedings at the outset of last night’s meeting but was there in time for the vote. Councillor Linda Bailey spoke at length while proposing the Motion on his behalf.

Apparently the two crossings which Sadiq Khan’t cancelled without notice or consultation would have reduced road congestion by relieving pressure on the A2 to and from Blackwall Tunnel. Something that Bexley Council failed to recognise when campaigning against Socialist bridges.

Councillor Richard Diment (Conservative, Sidcup) whose election in 2018 may well have doubled the number of brain cells available to the Conservatives seconded the Motion. He said that growth was essential to sustain the future for the residents of Bexley. “Unless people and goods can move freely into and out of Bexley the full vision of our growth strategy will be frustrated. Bexley has many deficiencies in its transport infrastructure. No Underground, no light railway, our roads and railways are radial and links are very poor.” And he went on in similar vein for several minutes repeating my own long held views.

“Across the river may look a short distance but making that journey by road involves lengthy detours with the added frustration of lengthy queues. They often become a problem on the roads in Bexley.” He covered the numerous difficulties of using public transport for the same journey forgetting to add that commerce does not generally travel on local rail services.

In Richard Diment’s view it was a mistake not to have gone ahead with the East London crossing proposed 30 years ago and cancelled by a Conservative government. In retrospect it can be seen that it would have solved a lot of problems.

“The Silvertown Tunnel is too far west to help Bexley’s growth plans. TfL is 20 years old and it has failed to address the problems of crossing the river in East London. It is scandalous.”

As always when it comes to river crossings the two parties were not going to agree absolutely and Labour put forward an amendment to the Motion.

Councillor Stefano Borella - why does the Mayor insist on calling him Borello? - said that the Labour Group had always supported river crossings east of Tower Bridge but went on to qualify that by saying they prioritised public transport.

Presumably Councillor Borella has not been called out in the middle of the night to family emergencies north of the river or simply wished to stay late - in pre-lockdown days - with relations until past midnight.

We heard the expected enthusiasm for buses and bikes and also a fully justifiable account of the Conservatives’ abysmal record on this subject. 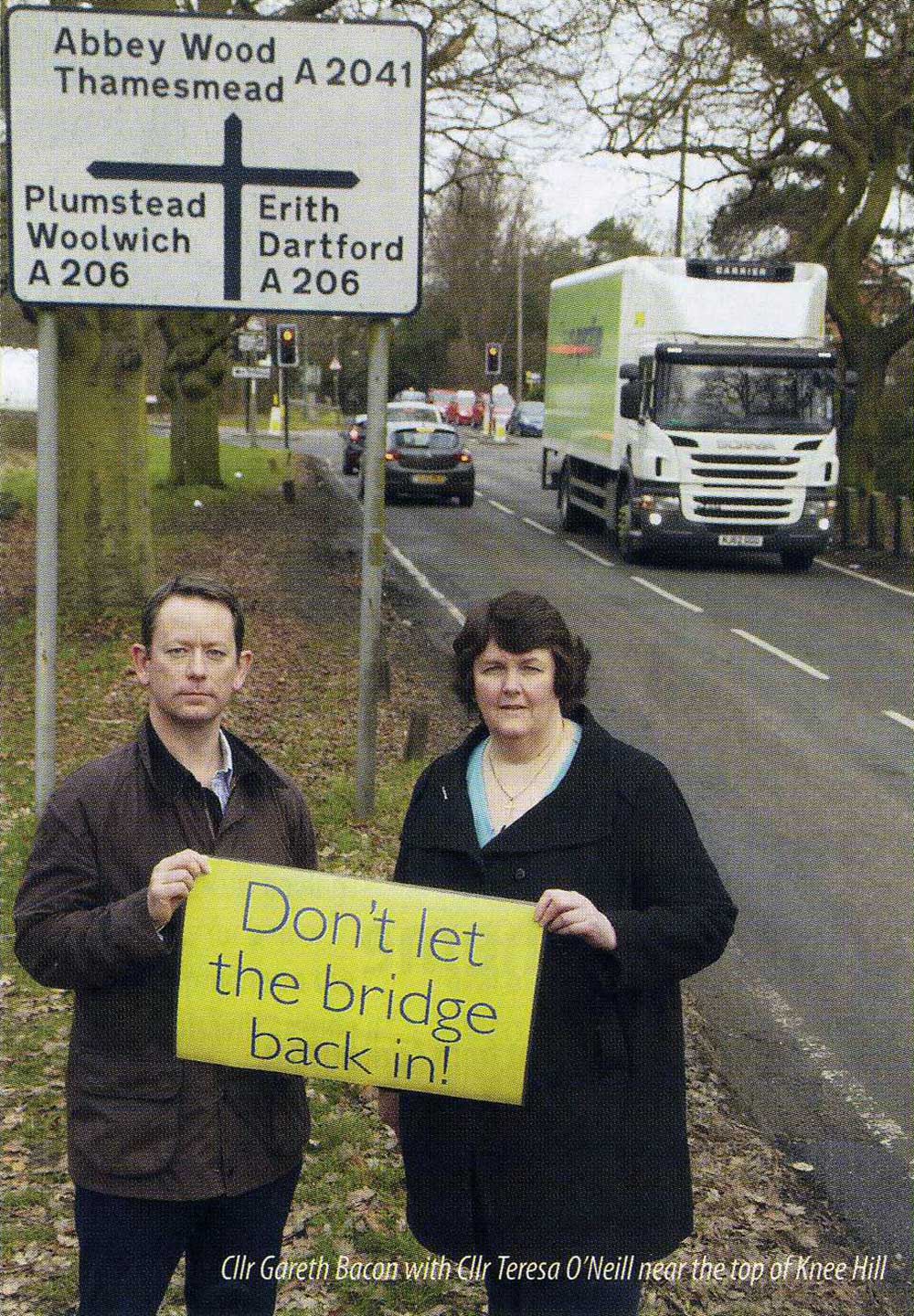 “In July 2002 Councillors Bacon and O’Neill voted in favour of the Thames Gateway Bridge and in 2004 recognised its benefits but a Motion in April 2010 put forward by (former) Councillor Tandy thanked Mayor Johnson for cancelling the bridge which in turn lost the £300 million of available funding. In 2013 the then Mayor reopened consultations which led to the famous picture of Councillors Bacon and O’Neill at the top of Knee Hill.

“Councillor Bacon as GLA member attacked the Mayor’s crossing policy at Mayor’s question time. In 2013 the Council’s policy was a ferry crossing at Gallion’s Reach but by 2015 they wanted a traffic bridge from Belvedere to Rainham with no modelling work.” (See also blue image above for confirmation of the preference for a ferry service.)

“An incoherent picture which has damaged the prospect of crossings being built a lot sooner.” A statement of the obvious perhaps but a salutary reminder of Conservative incompetence in Bexley.

Councillor Sally Hinkley (Labour, Belvedere) seconded the Motion and reminded us that Councillor Bacon had said in 2013 at a Council meeting that a river crossing would be “disastrous”.

Councillor Dave Putson (Labour, Belvedere) said that what was needed was more public transport, not roads.

Councillor John Davey (Conservative, West Heath) said he would oppose the amendment “because it puts priority of the DLR over the river crossing. We have always said that we want the DLR coming into Bexley, nobody has said we don’t want this, but my concern is that it puts it as priority over a local road crossing and I think that road crossings are really important. The Labour Party has always been anti-car and in Bexley we definitely need it. Do we trust him [the Mayor] to implement a new DLR much as I would like it?”

Cabinet Member David Leaf shared those concerns with a reference to the Crossrail fiasco and said the crossing was supported by up to 88% of local residents - which is something Bexley Council used to deny. “It is absolutely crucial that we focus on lobbying TfL for river crossings.”

Letter to News Shopper. Every bridge consultation in Bexley had come out in its favour. In 2013 almost everything that Councillor Craske said was designed to conceal the truth.

Councillor Bailey said she would not support the amendment because the amendment “takes away from the original Motion” by introducing another subject “as it is primarily for road crossings to stop congestion in places”.

The Labour Amendment was defeated exactly as you would expect.

Naturally this provoked a Twitter argument later in the day. I think Councillor Borella must have misheard Councillor Davey over a poor Zoom call.

Deputy Leader Louie French summed up and repeated much of the message already heard, that infrastructure growth is essential and in passing had some good news to announce. Bexley Council has renounced Low Traffic Neighbourhoods. “Some modelling suggests that South East London would become a high polluting car park and Bexley would be at a standstill.”

Councillor Bacon’s Motion passed. How could any sensible Labour Councillor vote against it? But they all did. Pure party prejudice. Opposition for opposition’s sake.

Note: An Index to Thames Crossing related features is being prepared.