1 July - Alright for some, but not for you

An attempt to take a short rest from the constant stream of staff complaints aimed at those whose management style allegedly creates fear and despondency in Bexley’s Finance Department comes to an end as the complaints switch to specifics.

Clearly Covid-19 has adversely affected Council finances. Unplanned extra expenditure, tax collection rate down and car parking and leisure income all reduced. The budget gap for next year is already looking to be around £20 million and only about a third of that can be saved by so called efficiency savings. Last year the Council overspent by some £3·5 million, this year things will be far worse. The Director of Finance has said that “If the government does not fully reimburse councils for their full losses, our reserves will be exhausted as we do not hold sufficient reserve balances to absorb the exposure”.

So what is the Council going to do about it? Cut Councillors’ allowances? Slash senior officers’ pay? Don’t be silly. 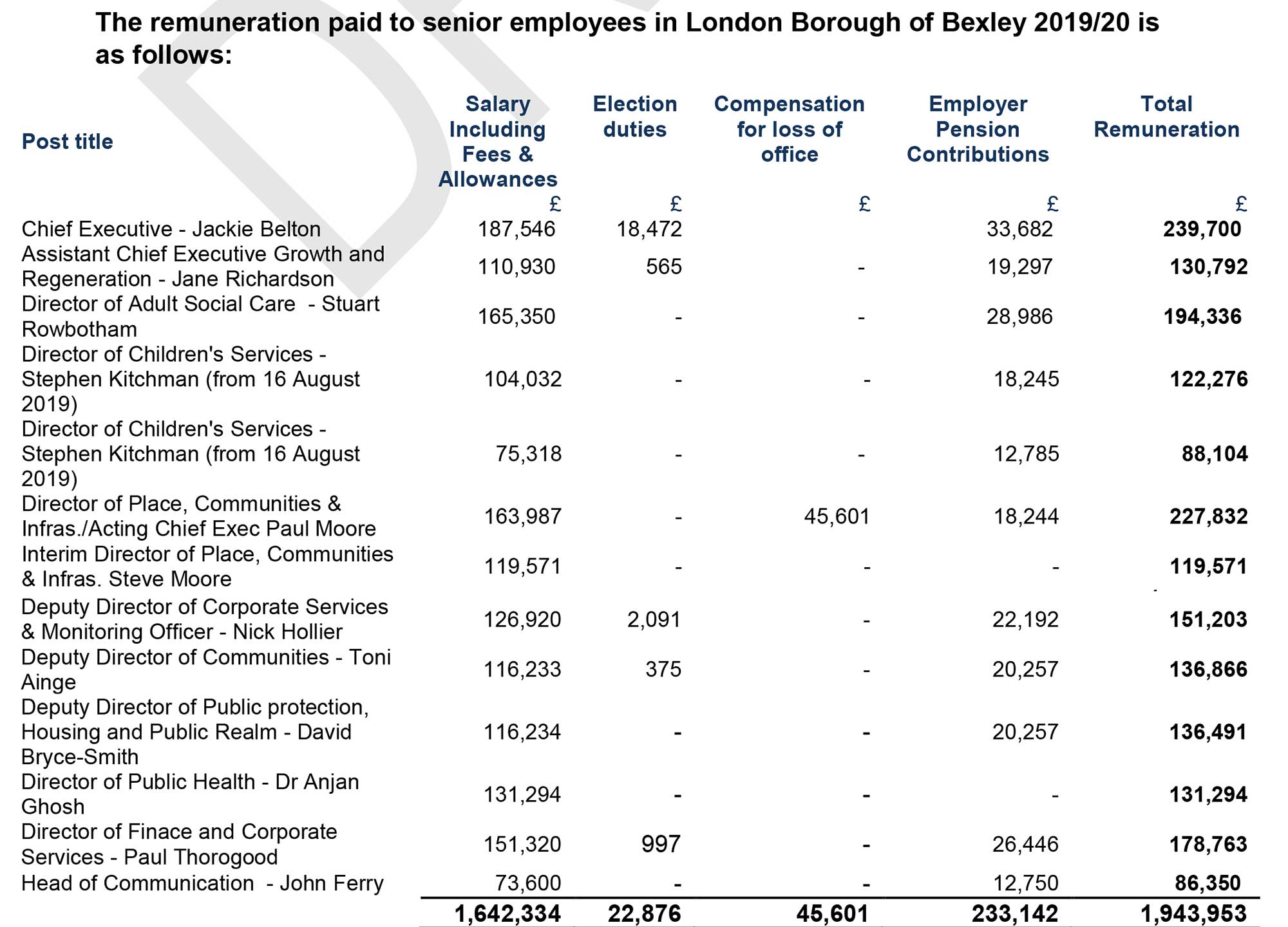 Note how the Director of Children's Services is listed twice for the same period at different rates of pay.
Pay increases over the previous year range up to 16%.

Much better is to make close to 10% of staff at the at the Learning and Enterprise College redundant and close all the Council run Children’s Centres, leaving the private sector to provide those services.

Only the lowest paid Council staff will be asked to foot some of the shortfall. They are going to be charged for use of the town centre car parks while working in the Civic Offices. Currently low paid staff pay either nothing or £200 a year with the top brass being asked to pay £600.

The proposal is that everyone pays £684 so that most staff will be nearly £60 a month worse off. What a way to treat people who have been called upon to dig the Council out of the current crisis.

Has Bexley Council’s management consulted with staff? No. The first they knew of it was a staff briefing just before the the proposal appeared in a Cabinet meeting Agenda.

Those who might take delight at the thought of Council staff being made to pay for parking should take the smirk off their faces. A proposal before the Cabinet is to raise car parking charges by a minimum of 20%, extend the applicable hours and remove most of the 30 minute tariffs. Doubling existing charges is not discounted. Just what the local economy needs to lift us out of Covid depression.

For good measure the basic price of the garden waste service will rise to £45 a year.