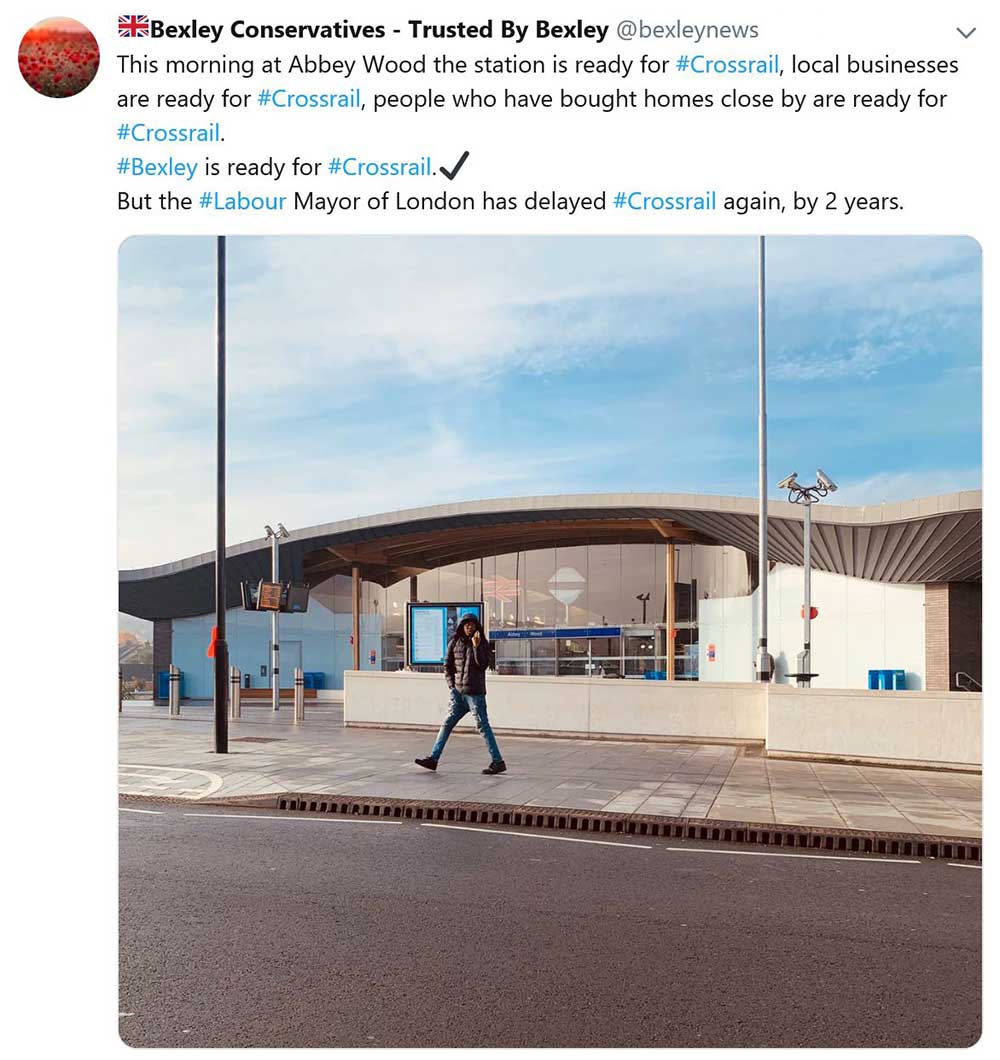 This Tweet by Bexley Conservatives is probably not good enough to qualify for Lie of the Day but it isn’t entirely honest.

I personally think that voting for Sadiq Khan is an act of madness, he has failed in all his ambitions, but I don’t think it is entirely fair to wholly blame him for the Crossrail delay. My guess is that he knows far less about Crossrail than I do and he failed to look properly into what was going on. 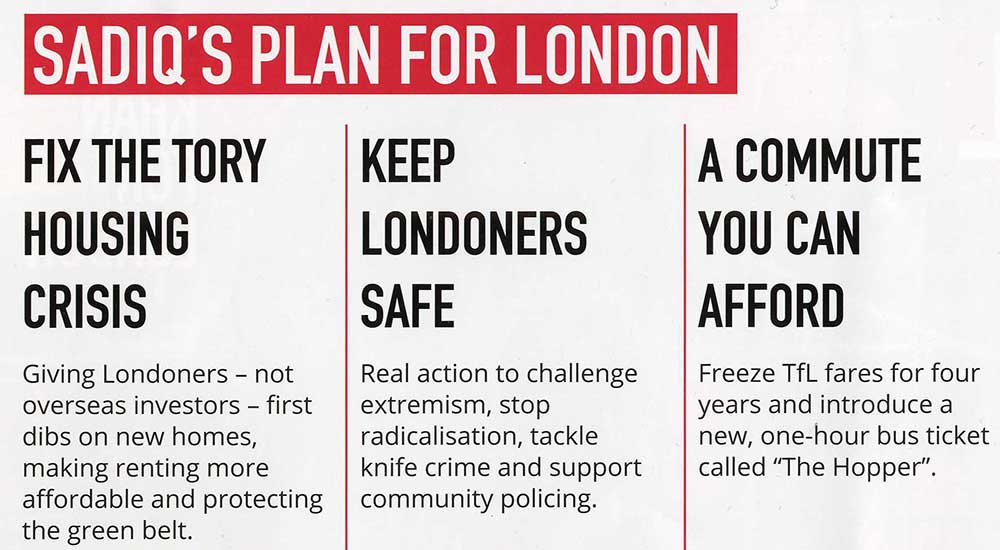 In retrospect we should have known Crossrail wouldn’t open on 9th December 2018 as planned. I was the only person to go to every single one of the Abbey Wood Crossrail Liaison Panel meetings; they were very interesting, but more than once I went through the Minutes with Roger K. who more often than not sat next to me, and concluded that not a single one of the action points listed three months earlier had made any progress at all.

If that was any indication of how things worked at Crossrail HQ, well…

Bexley Conservatives say they are ready for Crossrail and by their logic they have Sadiq Khan to thank for that.

Bexley Council’s regeneration work around the station, mainly paid for by Network Rail, was scheduled for completion in June 2018, six months before the new rail services were due to commence. They must hate people like me who don’t throw the leaflets away.

“Work will finish in both areas by June 2018. The Elizabeth line station will be fully operational in December 2-18.”

Right now we have Gayton Road to the south of the station unfinished and the stairs still out of use. To the north Felixstowe Road is about the enter its fifteenth week of its nine week closure.

A later revision to the aforesaid leaflet said…

“From June 2017 until Autumn 2018, major improvement works will be taking place on Harrow Manorway to upgrade the area between the flyover at Abbey Wood station and Eastern Way.”

Looking on the bright side Harrow Manorway does show signs of moving into its final phase.

For the first time in maybe eighteen months there is two way working all the way from the station to Eastern Way, the two roundabouts are pretty much completed and only yesterday I saw one of two 180 buses running in convoy reverse its direction via the Sainsbury’s roundabout without running up the kerb. Maybe Andrew Bashford is learning from past mistakes.

The pictures below were all taken yesterday afternoon. The bus stop sign suggests that the planned congestion (more bus lanes!) will only be applied north of Yarnton Way and the expensive German granite blocks are blackened by tyres just as quickly as the cheaper ones elsewhere in the borough.

All done by Christmas? I wouldn’t bet on it. 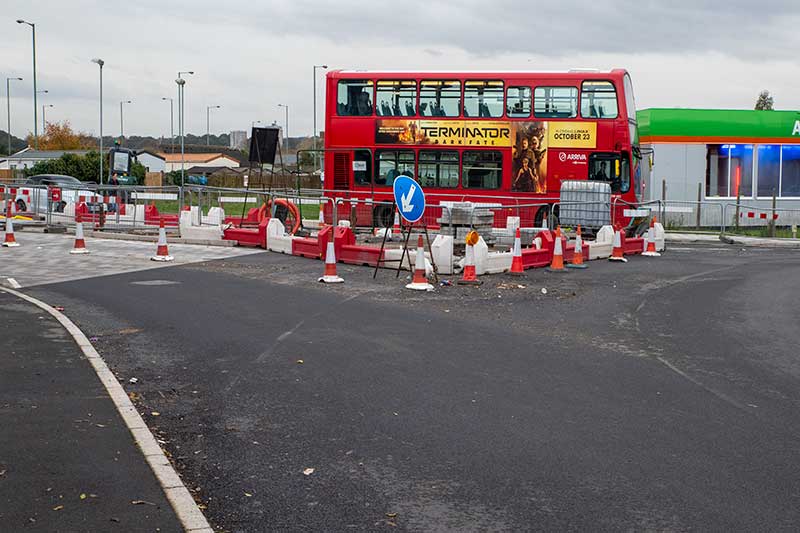 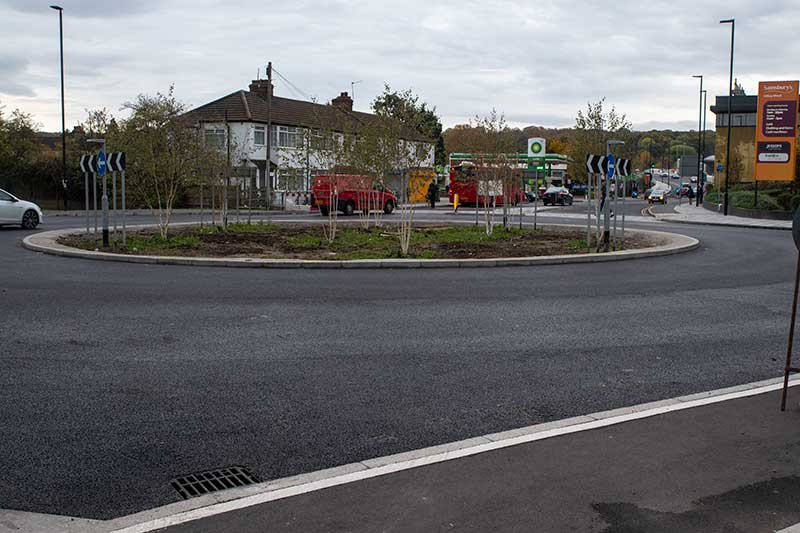 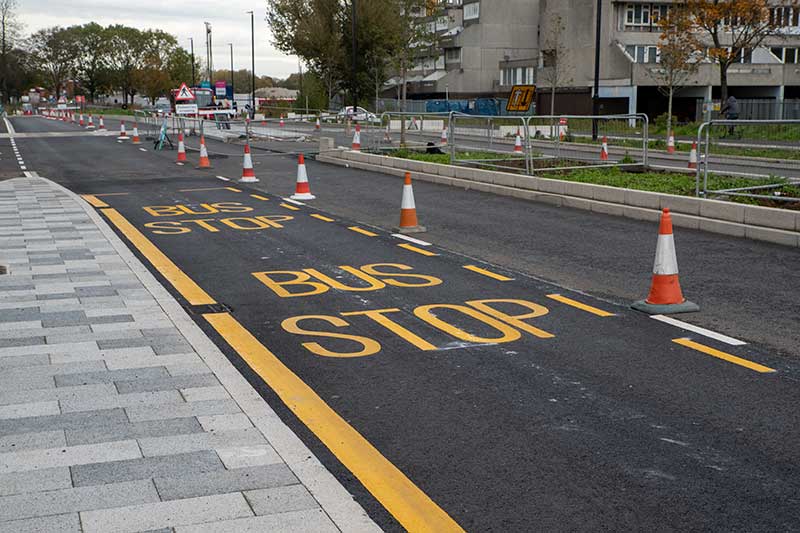 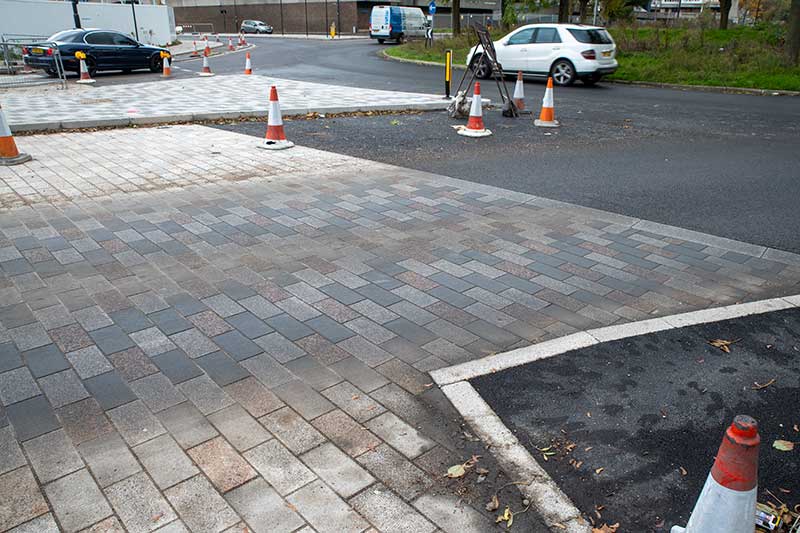