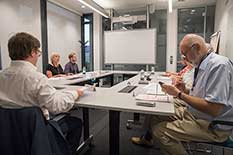 Maybe it was sunstroke but I got too many things wrong yesterday. I failed to notice that the evening meeting was of the Transport User’s Sub-Group and not the real thing where I had hoped to see the Southeeastern railway representatives squirm.

I also forgot to take my notebook and I forgot to reset the volume level on my sound recorder after reducing it at another venue, so my recording is barely audible.

But it was a very interesting meeting and I am glad I went, even if this report is largely dependent on memory. The meeting was held in a tiny room with no barrier to keep the public (me) away and it was both friendly and well enough chaired by Councillor Val Clark.

The Group had produced a ‘vision’ for the local transport infrastructure. It covered Thames Crossings, railways, riverboat services, buses, trams and roads including cycling.

On Crossings a tunnel is favoured for Belvedere because it causes far less land to become wasted. Land under a bridge cannot readily be built upon. The Port of London is not going to allow bridge support columns in the river which will make the approach roads even longer. This makes a bridge even more expensive while advancing technology is making tunnelling cheaper.

Crossrail is the main railway interest and as you know I am sceptical about the feasibility of an extension to Ebbsfleet. Even Bexley Council seems to be accepting that a four track solution isn’t viable. Teresa O’Neill should not have been so negative about transport infrastructure for purely selfish reasons after gaining the 2006 Tory majority.

A likely big problem after Crossrail services begin is parking. The plan is to extend the existing Controlled Parking Zone from its approximate 250 metre radius to 500 metres. According to my calculations that makes it four times bigger.

Councillor Danny Hackett (Labour, Lesnes Abbey) said that a CPZ was effectively imposing a £100 Crossrail Tax on residents in his ward and that it was unfair that they should suffer in support of the borough’s transport infrastructure. Except for Councilllor John Davey (Conservative, Crayford) none of the Tories agreed with him. Councillor John Davey said the right solution was a single yellow line with a time restriction on it to deter commuters. This however has a serious downside for Bexley Council. They would not be able to clobber the north of the borough with another tax and northerners do not generally speaking vote Tory so who cares?

Councilor Davey who has acquired the annoying habit of talking good sense in recent times said that if the CPZ becomes too big, residents on its periphery in possession of a resident’s permit will drive to the station thus totally screwing up the arrangements for those living near it.

Tiffany Lynch, Bexley’s transport expert recommended doubling the CPZ diameter to a kilometre but not doing it before Crossrail services commence so as to be able to better judge what the problems were.

Councillor Colin Tandy (Conservative, St. Mary’s) said that the Sidcup loop line should be pushed as the recommended route to Abbey Wood from the south. He said it only took “ten or twelve minutes” to get from Bexley to Abbey Wood. Unfortunately it takes twice that time and the service does not run in the rush hour. Maybe the Council could lobby for improvements?

Moving on from Crossrail to traditional train services a proposal to withdraw the half hourly Gillingham to Charing Cross via Abbey Wood and Lewisham service was revealed. From 2018 it would be replaced by a Thameslink Rainham to Luton service. Abbey Wood to Waterloo isn’t easy at present and it looks like it is about to get much harder. Bexley Council welcomed the proposal. They could bring back the rush hour Victoria services while they are at it.

Councillor Clark as Chairman who has previously admitted a flawed knowledge of the workings of Southeastern railways thought the starting point might be Rainham in Essex. Presumably there is already a tunnel she is not telling us about.

Despite Bexley’s lack of TfL train services its bus services are generally slow too because all the routes, from the north at least, go the long way around. Nevertheless it was said that about 90% of Bexley residents lived within 400 metres of a bus stop but some have a near 1,000 metre walk. All in Thamesmead of course. And they say it’s not neglected.

Councillor Clark noted that in Greenwich nearly every bus stop has an electronic departure board while in Bexley there are very few. I would go further than that, in Bexley what few there were have been progressively removed.

On roads the Council subscribes to the fashionable view that extra road space can generate more traffic but it is worried about air pollution. Councillor Tandy was the only member present to note that the likely reduction in the use of diesel cars and the move to electric propulsion would mitigate the problems within the next ten years.