12 May - Is Bexley so badly run that even the Councillors run away?

Bexley Council issued a warning yesterday to the effect that Bexleyheath Broadway would once again be congested due to the so called regeneration work.

A reader commented about the amount of dangerously protruding ironwork and said that motorists were swerving to avoid it. Get yourself down there with your camera, he said.

So I did at around 2 p.m. this afternoon but traffic was very light with no sign of any contractor activity.

It’s not easy to get a photograph that satisfactorily illustrates the raised ironwork and light though the traffic was I didn’t fancy lying down to get a worm’s eye view. 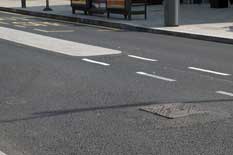 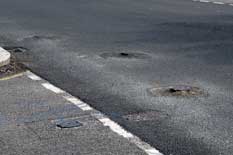 I didn’t see anyone swerve but I did see an old banger go over a manhole cover at a speed that almost certainly broke the limit and there was a metallic scraping sound.

Why readers continue to be amazed that Bexley Council leaves all sorts of hazards around the place I really do not know, but it is good that they still report it. 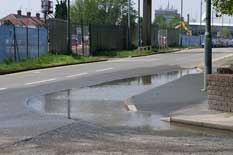 While on the journey home from Bexleyheath I realised that badly maintained drains and the consequent floods are ten a penny in Bexley. I passed this one on foot as quickly as I could. 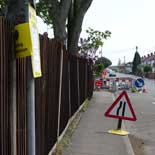 So far at least the proposed hole in the road which caused the Fendyke Road parking bays to be suspended appears to be entirely outside the bay boundaries.

The eastern extremity of the three parking bays is adjacent to the road sign, you can just see the faded white line in the enlarged picture. However as is fairly obvious, the road works are a fair distance away. 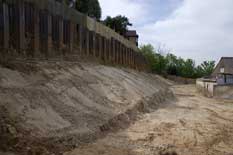 A recent picture of Ye Old Leather Bottle site complete with a wall to rival that in The Game of Thrones.

The developer plans to knock it down on 16th June.

Bexley is Bonkers is not Bexley Council
Every few months someone writes to BiB as if it is Bexley Council. This one caused some amusement.

Get my waste collection sorted will you!!
Your contractors keep leaving full bins.
I’ll leave them on your office doorsteps maybe you’re happy to wait two weeks for someone to take it away when they’re full of nappies. I’ll bring my SIX (six bins I still can't believe it) bins round, then maybe you can have the pleasure of the smell and picking up tins ‘n’ food every day!!!
Sort it out!

Six bins is a bit ridiculous isn’t it? My cousins in Waltham Forest were scathing when their Council introduced a third bin. They couldn’t believe I had six!

Maybe the complainant should have filled in the Council’s latest survey form?

All present and correct? Maybe not
Another message had something very different to say…

I’ve been reading your blog for a few years now. To start with I didn’t believe some of the stuff you were posting about the Tories in Bexley but the more I find out the more shocked I become.
I have heard from someone close to the Council that there is a Tory Councillor who is standing down in St.  Michael’s ward.
I don’t know whether it is true but apparently they are moving abroad and have already left the country. Shouldn’t this cause a by-election?
I was told that the Tories don’t want to announce because they want to avoid it happening on the day of the EU referendum. They are running scared of UKIP whilst we pay for Councillors who are leaving or may have left.
What a joke. 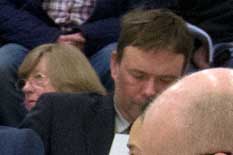 Nothing has ever been made up on Bexley is Bonkers, what would be the point of earning a reputation for spreading falsehoods? As for the report that either Caroline Newton or Joe Pollard has left the building, I have no idea.

I have put out a few feelers on the subject but without response so far.

Multi-occupancy homes
Several messages have introduced a new subject. It seems that whilst Bexley Council has seen the money making opportunities in their new Nail Bar Tax they are not so keen to licence landlords.

If a single house is rented out to several families it may require a licence. Part of the check list is reproduced below

I don’t quite get Item 3. “Is your property rented to one family household?”

If “yes” it may be multi-occupancy. It makes no sense to me and until it does I offer no comment except that several residents are claiming to be suffering from poorly run houses next door to them and there is a petition against it. A fat lot of good a petition will do in Bexley!

Having seen at first hand what can happen to a neighbourhood when people with different standards and cultures move in I can well understand the apprehension.