Following the exciting stuff that occasionally arises from Questions and Motions and the Leader’s report to Council comes the mundane and frequently boring reports and recommendations of the various Committees, but on Wednesday even those provoked controversy.

The Labour group didn’t accept the reports of any of the three Overview and Scrutiny Committees, the Licensing Committee or the Constitutional Review Panel. 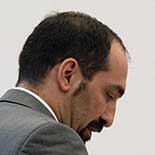 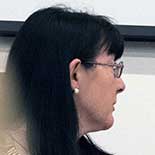 On the last of those Councillor Stefano Borella made several comments which were all dismissed by the Council Leader in a condescending tone while suggesting Stefano might have no real understanding of what democracy is all about.

If you think this is a somewhat inadequate summary of the proceedings you would be right. A recorder placed on a Councillor’s table picks up far too much of their whisperings and the jeering from Conservatives opposite. Stefano’s comments were largely obliterated by the noises off. I could hear Councillor Francis protesting about the vote not being properly taken but little else.

He claimed it was not clear to him who had voted for the revised Constitution and who had not but the Mayor didn’t seem to care. Undeterred Councillor Francis said he “had not seen a single member of this Council vote to change the Constitution of this Council”. The mayor eventually relented and asked for "a show of hands again".

The Licensing Committee report was subjected to a similar routine. Councillor Alan Deadman (Labour, North End) said a good team had run licensing for a very long time but it is now being “fragmented across four local authorities” with little consideration for the staff concerned.

The new Chairman of the Licensing Committee is Councillor John Fuller (Conservative, Christchurch). He said that the affected staff did not think the changes would make a great deal of difference to them. One Council officer was singled out for special mention, she was a very good Licensing officer but “we will be losing her”.

Councillor Mabel Ogundayo (Labour, Thamesmead East) made reference to “the growing population” and the problems with “HMOs and garage conversions” which wasn’t a million miles away from the UKP question earlier. Residents are living in “poor and illegal conditions” but she had been told it “was not a big issue now” and she had not been told what sort of support they might be given. “There has been no clear answer on primary school places and we should be prepared for this.”

Councillor Hunt who chairs the People Scrutiny meeting said it would have been better if Councillor Ogundayo had raised her concerns at his meeting and she said she had. He insisted that his “report is accurate and there has been no Motion or Amendment and so Madam Mayor I propose to Council that it accepts it”. Tory Councillors eagerly kicked Council Ogundayo’s concern for housing conditions in Thamesmead deep into the long grass. 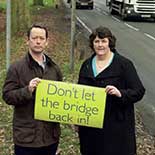 Councillor Borella asked about the Tories’ attitude to the Thames Crossings and the infamous picture from 2013 of the Council Leader and her then Deputy holding their embarrassing banner. It was probably Councillor Sharon Massey whose voice called out that Stefano was speaking rubbish, it is the sort of rude interruption for which she is famed. Other Tories continued to noisily advertise their confusion between the original bridge design that the government inspector rejected with the smaller one advocated by Boris Johnson. Either they are forgetful idiots or continue to believe that repeatedly lying is an effective strategy.

“Residents consistently say we need crossings and we need it now. We could have been sitting with already a bridge” said Councillor Borella.

He turned his attention to fly tipping and the ludicrous Tory claim that he is in favour of fly tipping. He complained that the statistics “had moved the goal posts” and were unreliable but at the last Places meeting the Cabinet Member responsible (Peter Craske) was more interested in telling the Committee of "the failed" Katie Perrior’s appointment to No. 10 than addressing his concerns.

The Leader objected to Ms. Perrior’s name being brought into the discussion and asked him to “withdraw his comment about Ms. Perrior which was well out of order”.

Sensitive soul isn’t she? The borough’s vulnerable children were failed during Katie Perrior’s reign. OFSTED knew it, surely everyne knows it? Councillor Borella said it was “a statement of fact and the truth is on the record”.

The Mayor asked Members to refrain from personal comments about former Members. 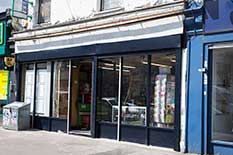 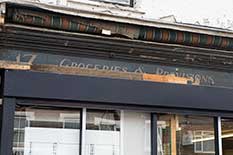 Councillor Danny Hackett (Labour, Lesnes Abbey) referred to the regeneration of Wilton Road in Abbey Wood. The plans were good “but it was too little too late”. He also said about Lesnes Abbey that ”it was disappointing that the Places Committee had not been given any presentation on that [the failure of the contractor). It is now significantly behind schedule”.

Councillor Cheryl Bacon said she had left the Scrutiny meeting early “for childcare reasons”. She was paid £750 to be at that meeting, most people would think that was more than enough to pay for reliable child care. £25 a minute is even more than the Chief Executive earns. Councillor Bacon said she wanted the “right bridge in the right place at the right time” and refused to comment on the notorious “Don't let the bridge back in” banner featuring her husband. The fly tipping statistics were defined by the Environment Agency. The Lesnes Abbey delay is “unfortunate” and with that the Places Committee report was accepted.

The Mayor asked Members to refrain from personal comments about former Members again even though none had done so.

Councillor Daniel Francis (Labour, Belvedere) accompanied by table banging from the Members opposite referred to the rather disgraceful deferment of his Places’ questions until next February. He said it “s bizarre that both he and Conservative Members were not allowed to ask questions at a meeting which ended at nine p.m.” Councillor June Slaughter was one of those affected and he thought it was because “the questions were getting too diificult”. 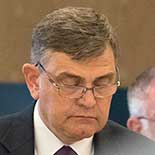 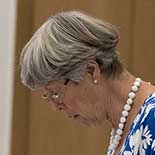 He said that not for the first time the Cabinet Member (Don Massey) was making hand gestures to the Chairman that discussion should be curtailed. “It is beginning to show why we have this strange seating arrangement, [the Cabinet Member faces the Chairman] it is so the Cabinet Member can indicate to the Vice-Chairman Maxine Fothergill when a difficult Member wished to speak”. He referred to “the stand up row” between Councillor Slaughter and the Cabinet Member over Old Farm Park and “we saw her closed down. It is a complete disgrace”.

Councillor Slaughter said “she could look after herself” and proceeded to praise both the Committee Chairman and “she had little doubt that Councillor Massey in his efficient way would have taken that [her comments] on board. I have absolutely no complaint”. It didn't look or sound that way on the night but I suppose the whips are all powerful.

Committee Chairman Councillor Hall said his new seating arrangement had been is place for two years - which isn’t true, the change took place in October 2015 - although the Cabinet Member had always sat in that position. “This paper should be moved and that’s it. Thank you very much.”