You may be relieved to know that there is only one more council meeting of interest before the end of this month and only one more, two at a stretch, worth the effort before councillors close down for Christmas. If you think it seems like only yesterday they came back from their summer holidays, you’d not be far wrong, it’s six whole weeks.

So let’s see if I can gallop through the rest of last week’s council meeting before everyone but councillors loses interest in who may come under the microscope next.

It was seven minutes past nine when council leader Teresa O’Neill was called upon to make her report to council. She usually does so in a reasonable fashion and then takes, or rather dodges, questions. It wasn’t a lot different this time.

She opened by saying she welcomed the [closed] debate on Children’s Services initiated by the youthful and not very bright (I am being facetious, see yesterday’s blog) councillor Ogundayo and went on to say “it was important this subject was aired in public”. Those who doubt she could be that stupid may wish to listen to the end of the following audio clip

She went on to thank councillor Sybil Camsey for her support during the secret debate and to report that the director of OFSTED she had recruited didn’t think that Bexley was a bad place. (Insiders tell me that she was chosen in the hope of getting a better OFSTED rating rather than children being better served.)

Teresa O’Neill said she “aspired to a sustainable good [children’s] service”. She went on to speak briefly of the budget but nothing specific and certainly nothing worth mentioning here; she devoted most time to plugging the Bexley Brewery in Erith. A welcome new enterprise for sure but why the lengthy free advert in the chamber? There will be a Tory link or maybe Tories just can’t keep off the booze. Councillor Philip Read has already praised the beer on Twitter and he is probably an expert on the subject, so on his recommendation I shall get some in for Christmas. 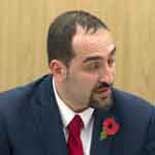 Councillor Stefano Borella said he had already sampled the beer but spent rather more time questioning the council’s yo-yoing policy on Thames crossings and congratulated them on following the Labour lead. He also objected to Page 34 of the leader’s report where she said the new Howbury Centre was “a fabulous space!”.

Stefano wished to remind members that the space had been “drastically reduced” and the sell off had provided £11 million to spend on the council’s new palace. Slade Green residents “had comprehensively rejected the scheme”. He lamented the fact that the leader’s report did not mention Bexley’s housing crisis or have anything to say about social housing.

On the subject of Children’s Services, councillor Borella reminded us that he has said before that the responsible cabinet member Katie Perrior should have resigned for her failures. Instead she was allowed to slink away at the last election.

Leader O’Neill was unrepentant, she reiterated that Howbury is now “fantastic”. Housing wasn’t mentioned because there is a consultation ongoing and on Children’s Services “I’ve said what I’ve had to say about it” and on the Thames crossings “we haven’t changed our position at all”. So that’s four good questions dodged in under a minute. 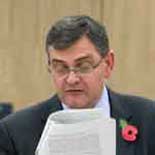 Councillor Don Massey, the cabinet member for Thames crossings, protested that he was not following the Labour lead.

Conservative councillor John Wilkinson asked the leader what had happened to the petition he had presented on behalf of Bedonwell school in April 2011. The leader passed the buck to councillor Massey who at the last council meeting had argued belligerently with parent Chris Attard that there had been no complaints about pedestrian safety at the school before his.

I won’t rub Massey’s nose in it more than is necessary; councillor Massey accepted that he was wrong and apologised for picking an unjustified fight with a member of the public at the last council meeting which he broadcast to the world via the webcast.

Chris Attard had left the building after being kicked out like the rest of us an hour or so earlier. 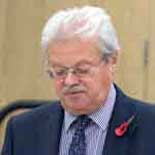 In defence of the council’s mismanagement of Children’s Services, cabinet member Phil Read who has been charged with picking up the pieces left by his predecessor said that currently 57·4% of social workers posts are filled. The 12% churn of permanent staff has fallen to 2% he said, with a very thinly veiled criticism of his predecessor who must have spent too much time furthering her PR money making machine. He ran through his ideas to further improve matters and there is no reason to doubt his sincerity even though his past record doesn’t bode well.

In response to Read’s final retort that councillor Mabel Ogundayo spoke “claptrap” councillor Abena Oppong-Asare provided a four minute address during which she contrasted the poor performance of Bexley with all the neighbouring boroughs and complained about the “patronising Councillor Camsey”. She faced jeers led by councillor Linda ‘Biffa’ Bailey who used words rather than blows this time to make her point.

Fortunately for all, a patient but perhaps exasperated mayor then announced that the allotted time had expired but not before the leader chipped in that she agreed that Bexley council “was not good enough”.

Note. There are no photos of councillor Oppong-Asare because at no time was I able to see her, such is the poor design of the chamber, and there are no large photos of the others because I sometimes failed to hold the camera steady enough; and I've not been on the Bexley Brew yet, honest!