They say that small minds are easily amused but one of the things I enjoy about watching Bexley council is to see what new excuse or lie they will come up with when caught out by something or other. My favourite so far is that a Policy is not a Policy it is a Protocol, followed by a Protocol is not a Protocol it is a Rule Book Issue and as only Policy matters can be questioned at council meetings you cannot actually ask Policy questions because they have been redefined as Rule Book Issues - which are not allowed.

Correspondents tell me how disappointed they are at Bexley council providing damn fool and evasive answers to their questions but invariably such answers provide grist to the Bonkers’ mill. I was therefore looking forward to Bexley council’s response to finding themselves on the wrong side of the Thames crossing argument. 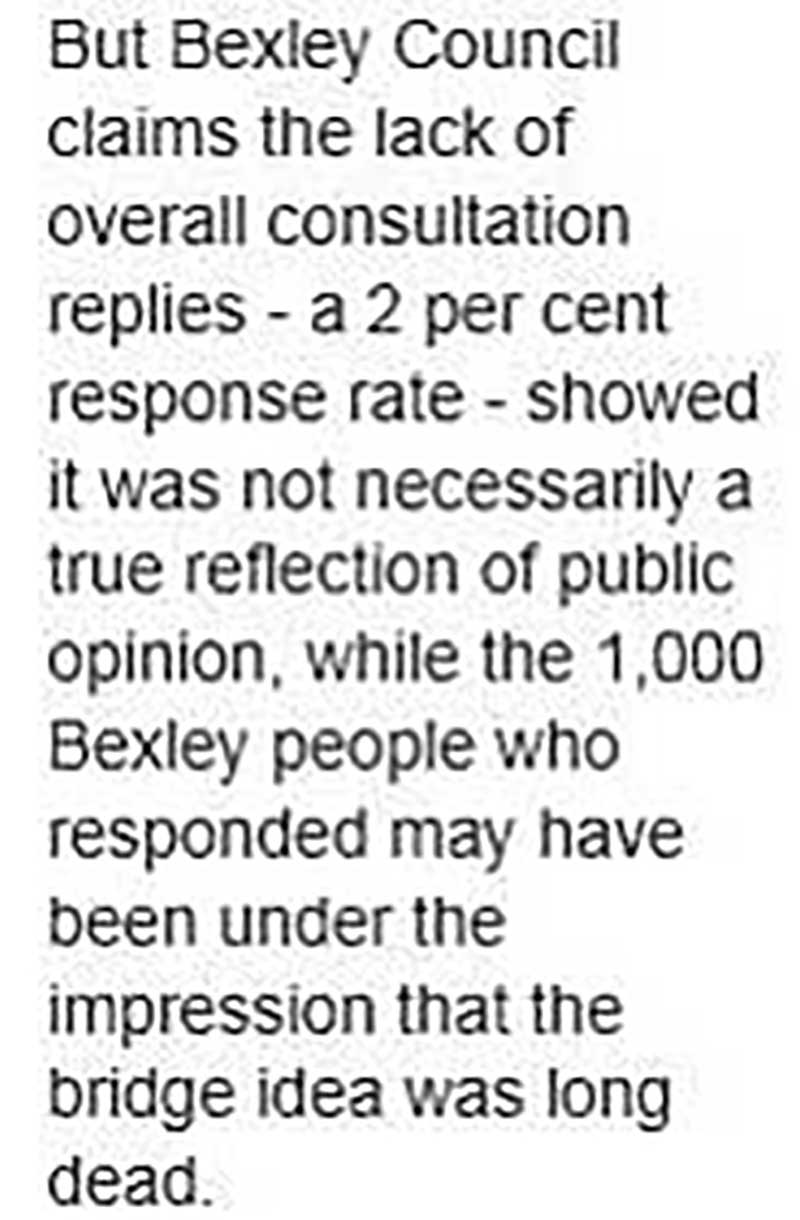 They claimed in letters to newspapers to have read residents’ minds and told them they didn’t want a fixed crossing and spent £3,366 on a leaflet to convince the dissenters. Now that Bexley council has failed to persuade residents that remaining in the dark ages for the foreseeable future is their preferred option, the council is griping that the TfL consultation produced an inadequate sample. (1,053 respondents from Bexley.)

I find that a bit rich. When there was a consultation about Bexley adopting a mayor to replace the cabinet system only 99 people responded and I wouldn’t be at all surprised if 63 of them were councillors. They seized the opportunity to stick with a cabinet despite a bigger poll in the Bexley Chronicle going heavily in the other direction.

Strategy 2014 which has been the cornerstone of the present administration’s decision making was approved on the back of a massive consultation exercise with the town festooned with encouraging posters. It failed to reach a four figure response (829) but Bexley council seized on it as vindication of its plans. Bexley council will only accept democracy in action if it suits their preconceived notions.

It will argue no doubt that the people keenest on a bridge will have been those that rushed to complete the consultation and thereby unfairly biased it, but a closer examination reveals that the number using Blackwall four or more times a week was almost exactly balanced by those using it less than once a month.

Where are all these people clamouring for splendid isolation? Do they exist outside Teresa O’Neill’s cabinet? The newspaper commentators are almost entirely in favour of solving the transport problem sooner rather than later.

Maybe the council leader should give some thought to the fact that despite putting a magazine denigrating the bridge through every letter box in the borough and following it with a tax payer funded leaflet imploring residents to ‘Don’t let the bridge back in’, she aroused the interest of fewer than half the number or people who flocked to sign Elwyn Bryant’s petition asking Bexley council to renegotiate the obscenely high senior salaries O’Neill has to pay to ensure the loyalty of her henchmen.