I managed to attract the attention of a bridge objector at the weekend. I’ve not been able to do that before and maybe that is because contrary to councillor Peter Craske’s News Shopper lie, Bexley residents have not “overwhelmingly rejected” a bridge. There have been two surveys conducted on the matter, ten years old it is true, but one found 79% in favour of a bridge with 2% against (19% don’t know) and the other gave it even greater support. (84%.)

What was a little disappointing is not that someone should be against a bridge but that they believed the scheme put forward recently is the same as that rejected five years ago. That one provided for a dual carriageway road, bus lanes, cycle and foot paths, with the possibility of the Docklands Light Railway too.

The latest proposal was summarised by Transport for London and as you can see, only a bare-bones structure is up for consideration.

However as many readers will have supposed, the main point of Saturday’s blog was to demonstrate that even after his 18 month tussle to persuade the police to overlook what gets sent over his internet connection he has not changed one jot. Councillor Peter Craske still cannot stop himself lying.

It is not Bexley’s Labour councillors proposing a bridge as he wrote in the New Shopper, it is a Tory Mayor who allowed it to be an option in the recent consultation. Supporting is not proposing.

“All HGVs and vans” will not “descend on Knee Hill” as the liar would have you believe. TfL has not quantified the extra traffic a bridge might generate. “Ten times the volume” was a lie manufactured by Bexley council for their tax payer funded propaganda sheet recently poked through letter boxes across the borough. Neither did the residents most affected by a bridge “overwhelmingly reject” it. They voted Labour just as they always do, just as surely as the more affluent end of the borough voted Tory. The only surveys on the subject overwhelmingly rejected Craske’s argument. 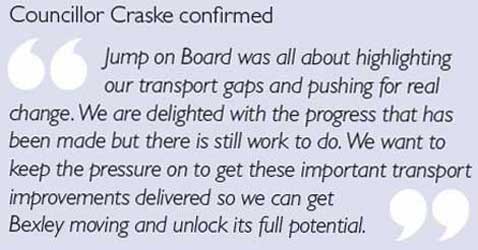 Has anyone thought about straightening out the kinks and bends on Knee Hill? It would make a massive improvement to safety and traffic flow. A couple of extra feet on each side wouldn’t go amiss either.

Far cheaper and more beneficial than the disruption being caused in Broadway.

Perhaps I should declare a personal interest in a Thames crossing. My father’s 93 year old sister lives nearer to me than does Elwyn Bryant in Bexley Village and I can get to him in twelve minutes given a clear run. There is no one else able to do the old lady’s odd jobs and shopping and I am lucky if I can get to her in fewer than 45 minutes. She has lived in the same house in East Ham since she was 20 years old; you try getting her to move!

No one would countenance Thamesmead residents not being able to get to Bexleyheath in much under an hour as the norm. Getting to neighbouring Newham shouldn’t be such a problem in the 21st century. Blackwall was built in the 19th and the fact it is still the best on offer is utterly disgraceful. At least the visitor’s parking permit is free in Newham. (Up to 30 visits a year, 30 pence thereafter.)